Valencia Moto2/Moto3 testing round up 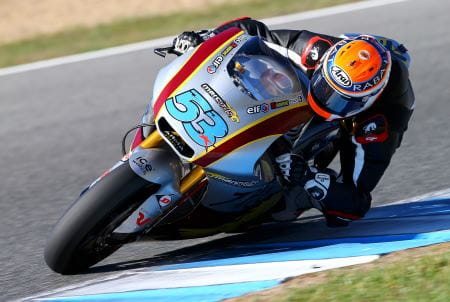 After edging towards the title fight in 2013 with the Pons team, Esteve Rabat switches to Marc VDS for the season ahead and the new pairing got off to a good start, with the Spaniard topping the timesheets at the first official test of the season in Valencia. Rabat’s old team were on his heels though with new recruit, Moto3 World Champion Maverick Vinales.

Setting the second fastest time, Vinales makes a clear statement of intent ahead of the season. Given Moto2 has traditionally been a tough series to get used to; Vinales performance is verging on scary, setting a faster time than experienced Moto2 contenders Takaaki Nakagami and Thomas Luthi.

Sandro Cortese set the fifth fastest time from Jordi Torres, Mika Kallio and Nico Terol with Julian Salom and 2013 Moto3 runner up Luis Salom in tenth. Brit Sam Lowes continued to impress on his Moto2 debut, setting the twelfth fastest time while Gino Rea, who suffered a foot injury on the second day ended up twenty-seventh. 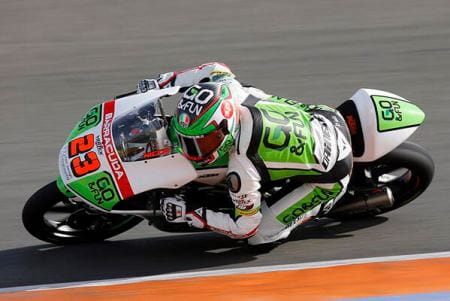 Despite Honda having developed a new bike to take on the rapid KTMs, so far it doesn’t seem to be working that way with KTM dominating the top eight after the first official test. Italian, Niccolo Antonelli set the fastest time for Fausto Gresini’s GO&FUN team as the squad’s move to KTM seems to have paid off. Jack Miller set the second fastest time on the ‘Factory’ KTM ahead of Moto3 returnee Danny Kent, who’s riding a KTM with Husqvarna stickers.

Valentino Rossi’s Moto3 team got off to a great start with Romano Fenati in fourth place just four tenths from Antonelli’s fastest time. His team mate, Bagnai set the sixth fastest time with Isaac Vinales sandwiched between them.

Juanfran Guevera was the first Spaniard in the field (in a somewhat welcome change!) for the Mapfre Aspar team on the Kalex KTM with Miguel Oliveria setting the ninth fastest time on the first non-KTM powered machine.