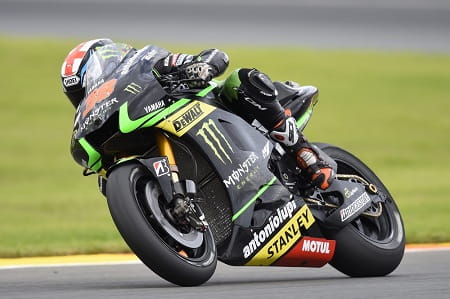 Bradley Smith was left furious after marshals prevented him from re-joining the circuit during today’s MotoGP race via a short cut permitted within the rules.

The Briton ran into the gravel at turn eight after tucking the front and wanted to take a short cut to re-join the track at turn thirteen, something not prohibited by the rules unless he gained position. However, Smith says as he tried to do so three marshals blocked him in his path and made him turn around. In the process of turning in the gravel, the Tech 3 Yamaha rider ended up on the floor and he says it was through no fault of his own.

“I didn’t actually crash,” said Smith talking after the race. “I tucked the front into turn 8. I knew there’s a loophole in the rules that allows me to re-join the track without taking an advantage, which I was going to be able to do, running through turn eight and re-joining at turn 13, just like Iannone did but nobody saw on camera. I went to do the same thing but the marshals ran out and blocked me from doing it and then during the process of me getting back on track I ended up on the floor. I knew the rule, they didn’t and unfortunately I’ve lost seventh position in the championship and sixth in today’s race because of it.”

When questioned about how he ended up on the floor, Smith responded: “I don’t know, but it wasn’t my fault. I think that something happened from an outside person.”

After the race, Smith went straight to race direction to file a complaint. He says the race director was able to verify his version of events from CCTV and has acknowledged the rules will be changed for 2015.

“I’ve made a formal complaint about the situation, unfortunately we’re not going to be able to change today’s race position or the championship standing but it’s something that will be clarified in a rule for next year I am sure” Smith continued. “In the written rule of this weekend, it was only written that the short cut was closed but there was a gap going through the gravel trap that you were able to use and as long as you didn’t gain an advantage. I would have been able to keep hold of my position. At other circuits there are written rules stating where you can re-join the track and where you can’t, so it was a loophole that I was using because it was there. It won’t be there next year so at least that will be cleared up and hopefully the marshals will be more aware of the rules.

“I haven’t spoken to him since he’s seen the CCTV so I don’t know the full story. All I know is that it’s official from Mike Webb that he’s seen a scenario in which I was blocked from using something that technically I was allowed to use. He didn’t comment on me ending up in the gravel so I need to speak to him to figure out what happened.”