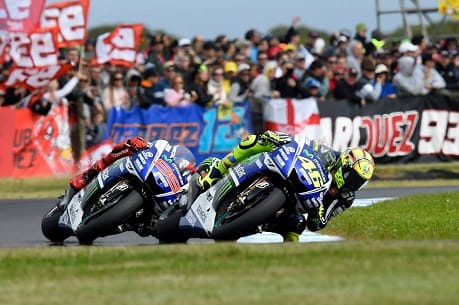 Valentino Rossi was triumphant in his 250th MotoGP race at Phillip Island after a rapid change in temperature saw many of his rivals dramatically crash out of contention.

After a strong start, Andrea Iannone dramatically crashed out after contact with Dani Pedrosa, who retired to the pits because of the damage.

Having taken the MotoGP title 7 days ago in Japan, Marc Marquez shot into the lead in the early stages and looked set to equal Mick Doohan’s record of 12 wins in a single season by a comfortable margin. However the Spaniard’s race ended as he lost the front coming out of Lukey Heights, saying goodbye to a four second lead.

This left Rossi, who started on the third row of the grid, to pick up the pieces, with Jorge Lorenzo struggling with grip from his deteriorating front tyre. 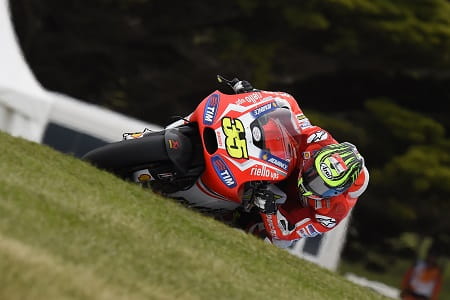 After starting from second on the grid, Cal Crutchlow maintained a strong pace to run third after Marquez’ fall. The Brit passed Jorge Lorenzo in the closing stages and looked set to equal his best-ever Grand Prix result until he lost the front under braking on the final lap.

Pol Espargaro also looked set to pass Lorenzo to take his first MotoGP podium finish but crashed out in pursuit of his fellow Spaniard. This left Bradley Smith in chase of Lorenzo, with the pair promoted to second and third respectively by Crutchlow’s fall.

Dovizioso finished fourth ahead of Hector Barbera on the Open Ducati with Alvaro Bautista beating Scott Redding to the line to be top Honda in sixth place. Hiroshi Aoyama finished eighth with Alex de Angelis and Nicky Hayden rounding out the top ten.

Stefan Bradl also crashed out and was later handed a penalty point for a collision with Alex de Angelis. Bradley Smith was also penalised for passing under yellow flags during this incident. Pedrosa & Iannone’s contact will be investigated in Sepang, with Iannone still receiving treatment.

Rossi’s win moves him up to second in the championship, eight points ahead of Lorenzo with Pedrosa now fourth.