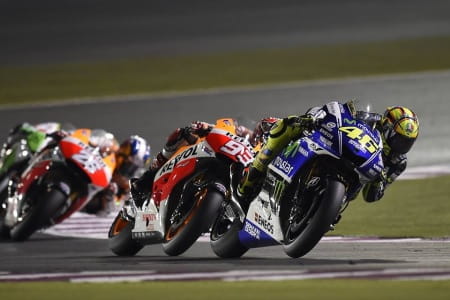 Valentino Rossi has praised MotoGP bosses after this weekend’s Grand Prix. The nine-time World Champion says it’s the first time in years that so many riders at the front of a race have run the same pace throughout and all made mistakes such as going wide.

The comments come after the Italian was beaten to victory this weekend in Qatar by World Champion, Marc Marquez with Jorge Lorenzo crashing out on the first lap. While it was very much a Marquez vs Rossi affair at the front, a number of other riders were able to run a pace fast enough to win but lost out through one thing – making bigger mistakes than their rivals.

Rule changes in the MotoGP class have come under mass criticism in recent weeks, but Rossi has said he thinks Dorna’s move could be a ‘great idea’ if it’s to make the racing closer. Factory bikes face the challenge of racing on just twenty litres of fuel this year and are permitted to use just five engines throughout the season with no development. This in itself seems to have brought things closer amongst the factory bikes but then there’s also the open class. A more cost-effective form of racing rewarded with concessions such as extra fuel, engines and no freeze on development.

By all means, it was one of the most exciting MotoGP races in many years and should things continue as they were at Qatar, Rossi could be right.

"I’m very happy but a little bit upset because I lost. Marc is very strong and I enjoyed very much the whole race” said Rossi.

“It was a great race, very funny from the beginning, I started from behind and I had to risk in the first laps. I was very precise and didn't make any mistakes.

“At the end I played my card with Marc but he was stronger than me so he won and he deserved it. It’s the first time it looked like an old race from MotoGP from ten years ago, all together on the same pace, some mistakes, going wide and so on. Maybe Dorna had a great idea! The Yamaha is always good in Qatar and I worked very hard in the practice for the race.”