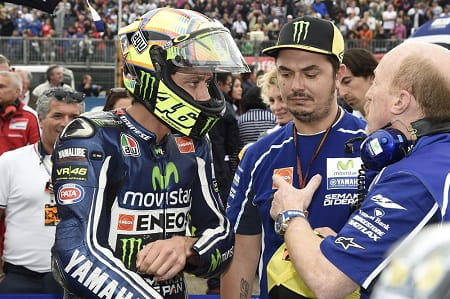 Valentino Rossi has branded the artificial grass on the periphery of Aragon’s MotoGP circuit as ‘very dangerous’ after heavily falling out of Sunday's race and ending up in hopsital.

Overnight rainfall and cooler temperatures left the Motorland Aragon circuit slightly damp for Sunday’s racing, especially off the racing line and on areas of run-off.

Having made a strong start from sixth on the grid, Rossi was putting pressure on Dani Pedrosa for third when he overshot his braking marker and ran-off the track. Hitting the wet astro-turf, his rear end came round seeing the Italian flung from his seat before crashing heavily to the floor closely followed by his Yamaha.

Having momentarily lost consciousness in the crash, Rossi was diagnosed with concussion by the Clinca Mobile before being transported to hospital in Alcaniz for a precautionary CT scan. With the scan showing clear, Rossi discharged himself and returned to the circuit late last night.

“I’m fine, everything is ok, and this is the most important thing” said Rossi. “I did not injure myself too much except for a big bump to the head. Last night I had a little headache but today I'm fine, I'm 100%. It was a real shame because before the race we made a change that would have helped me a lot; the bike was strong, I was going well, I had recovered the gap in the first few laps and I was there with the leading riders. I felt good and I am sure I could have made a good race, so it was a real shame to fall. In a way I'm almost glad because even though we had a difficult weekend on Sunday we were competitive and this was supposed to be a track that is not very good for us.

“Unfortunately, like Iannone I went onto the artificial grass. This is always very dangerous and especially in these cases because the track was still wet from the morning shower and there was nothing to be done. Marc and Dani tried to stay on track on the slick tyres but they took a big risk and in fact they crashed. In my case, if I had gone off track one meter before, I would have just gone wide, instead I touched the grass and I fell.”

Despite scoring no points yesterday, Rossi remains third in the championship standings with 214 points.