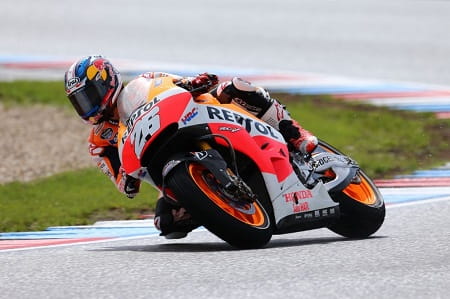 Marc Marquez’ winning streak finally came to an end this afternoon as Dani Pedrosa took victory in Brno while his younger team mate finished off the rostrum for the first time since Mugello last year. Jorge Lorenzo finished second ahead of team mate Valentino Rossi.

Andrea Iannone took advantage of his front row start darting into the first turn ahead of his 2015 team mate Andrea Dovizioso. Dani Pedrosa slotted into third place ahead of Yamaha pairing Jorge Lorenzo and Valentino Rossi. After a shocking start from pole position, Marc Marquez sat in sixth on the first circulation.

Having taken Pedrosa into the second lap, Lorenzo shot past the Ducatis in one clean sweep to take the lead. Dani Pedrosa soon made his way past Dovizioso and Iannone in attempt to chase down Lorenzo, who was beginning to pull a gap with his competitors stuck behind the slower Ducatis.

Marquez took fifth from the injured Valentino Rossi on the fourth lap before setting his sights on Andrea Iannone occupying the final podium position. The former Moto2 rivals locked into an intense battle for third position, with Iannone on inferior machinery refusing to give up.

At the front, things were starting to look shaky for Lorenzo with the Spaniard having developed a shadow in the form of the #26 Repsol Honda. Pedrosa took the lead on the sixth lap, instantly pulling two bike lengths on his fellow Spaniard. 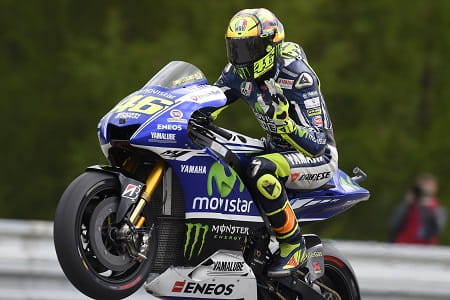 As Pedrosa settled into a steady lead,  all eyes were on Marc Marquez to see whether he’d cut through to be pack to take the lead and win his eleventh consecutive Grand Prix but acthe 21-year old looked to be struggling to close in on Jorge Lorenzo in second place.

Marquez’ chances of beating Agostini’s record looked less and less as the race went on, especially as the second YZR-M1 of Valentino Rossi latched onto the back of the RC213V. Rossi took advantage of a mistake from the World Champion to slip past on the twelfth lap. A plethora of uncharacteristic missed apexes saw Marquez drop off the back of Valentino Rossi, the Spaniard clearly struggling.

Lorenzo closed the gap to Pedrosa to just under a second by the last lap but the Mallorcan was unable to find a way past. Rossi took a distant third ahead of Marc Marquez finishing off the podium for the first time since Mugello 2013. Andrea Iannone impressively held off Dovizioso on the factory Ducati for fifth with Stefan Bradl, Aleix Espargaro, Bradley Smith and Alvaro Bautista rounding out the top ten.