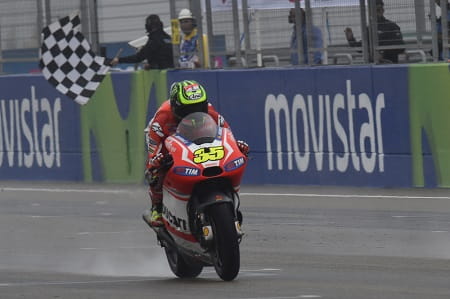 After Cal Crutchlow took Ducati’s third podium of the season two weeks ago in Aragon, questions have raised over whether Ducati would lose the open class concessions granted to them at the beginning of the season.

Ducati were permitted to use the open class concessions at the beginning of the season as a factory team that did not win a dry race in the 2013 season. These concessions included a 24 litre fuel limit (as opposed to the 22 litre limit imposed on other factory teams), use of up to 12 engines per rider and the benefit of extra-soft tyres.

The caveat to all of this was that should Ducati achieve a total of three podiums, two second places or a victory in dry conditions during the season, they would lose the fuel and tyre concessions from that point.

Ducati has now finished on the podium three times this season, with Andrea Dovizioso in Austin and Assen and Cal Crutchlow last time out in Aragon.

The confusion arises at what constitutes ‘dry conditions’. Is it the race director’s declaration at the start of the race or the conditions when the bike crosses the line at the end? Austin was dry both at the start and the end, Assen was wet throughout – although some riders did switch to dry tyres, they weren’t running dry pace – whereas Aragon, was bone dry at the beginning and quite wet at the end.

Mike Webb, MotoGP’s Race Director, says the rules state the podiums have to be achieved in ‘dry conditions’, not ‘a dry race’, meaning should the conditions be wet as the rider crosses the line the podium does not count against them in terms of the open class concessions. 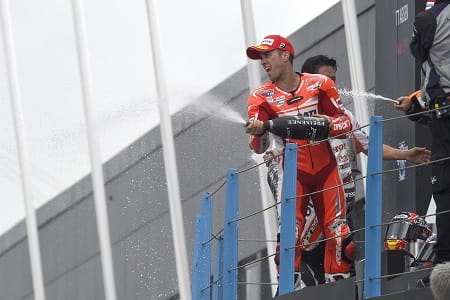 “Ducati have achieved one dry podium so far, which was Texas” explained Webb. “I declare a race wet or dry at the beginning because it affects how the teams set their bikes up, knowing whether they are going to be able to use the spare bike or not. When conditions change during a race in MotoGP with the white flag I can tell them conditions have now changed which is what happened at Aragon and they are allowed to use the spare bike

Based on this, should Ducati achieve a victory, a second place or a further two third place finishes in dry conditions this season they will lose the fuel and tyre concessions, while the engine limit will remain the same.

Suzuki and Aprilia will be granted the same concessions when they return to MotoGP in 2015, before the full regulations overhaul for the 2016 season.