Marquez beats Rossi in Qatar thriller as Lorenzo crashes out 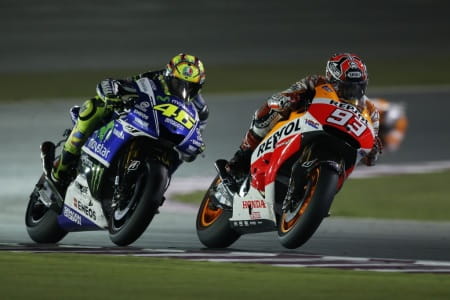 This weekend saw the largely anticipated return of MotoGP and after all the drama, including multiple rule changes, it was an absolute corker. As practice got underway on Thursday and Friday, all eyes were on the Forward Yamaha of Aleix Espargaro, running in the newly introduced ‘open class’ as he topped all three sessions.

Making use of the softer tyre available to the Open specification bikes, Espargaro was hot favourite for pole come qualifying on Saturday. Even when he crashed during his first outing in Q1, the twice CRT champion managed to return to track on his second bike running pole-position pace. Unfortunately the Spaniard crashed a second time before completing his hot lap, wiping out his chances completely. Fingers were crossed in the Gresini Racing garage as Alvaro Bautista held the top spot with a minute to go, but the Spaniard was denied his first-ever pole position by World Champion Marc Marquez in the closing moments of the session. 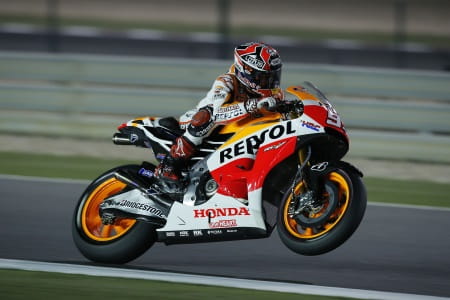 Ahead of qualifying, the fastest factory bike had been fifth, so for Marquez to secure pole position made a real statement of intent.

As the race got underway however it was Jorge Lorenzo who made a rocket-ship start from the second row of the grid to take the lead into turn one. Lorenzo had suffered a tough weekend up to this point, with the double world champion complaining about a lack of grip from Bridgestone’s new rear tyre. Seeing his chance to go for the win he tried to pull the pin but it seemed to be too much too early, as the Factory Yamaha rider crashed out following an uncharacteristic mistake before he could complete the first lap.

This left German rider Stefan Bradl out in front from Valentino Rossi and Marc Marquez, who had just managed to get past Spaniard Alvaro Bautista. On lap eight, Bradl fell leaving fans’ favourite Rossi to take the lead. At mid-race distance it was Dani Pedrosa looking strong as he took third place from Bradley Smith and began to chase down the leading duo with Marquez unable to pass Rossi at the front. 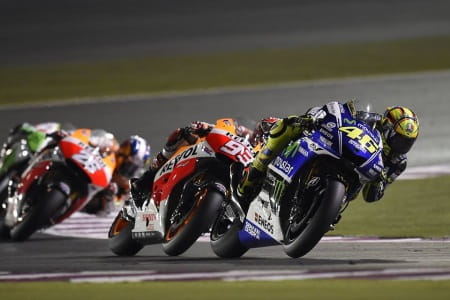 On lap fourteen, Marquez finally passed the Italian, leading for a couple of laps before Rossi fought back, with an epic battle ensuing between the pair in the closing laps. Both determined for the victory, Marquez and Rossi swapped position and paintwork multiple times on the penultimate lap, before Marquez got a much better run out of the final corner allowing him to gap Rossi’s slower Yamaha down the straight. Marquez maintained the gap throughout the final lap, leaving Rossi with little choice but to settle for second place. Dani Pedrosa took third after Alvaro Bautista fell while battling with the Repsol Honda man.

A crash from Bradley Smith saw Aleix Espargaro take a career-best fourth place, ahead of the Ducati pairing of Andrea Dovizioso and Cal Crutchow. It wasn’t all good for Crutchlow however, as he cruised across the line after suffering from technical difficulties caused by a transponder failure throughout the race.

Scott Redding crossed the line seventh in his MotoGP debut after a tough battle with 2006 World Champion Nicky Hayden, with Colin Edwards and Andrea Iannone, who crashed out of fifth place on the second lap, rounding out the top ten. 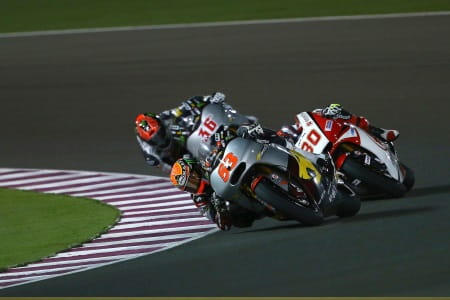 In Moto2, a three-way battle saw the Marc VDS bikes of Tito Rabat and Mika Kallio fighting Takaaki Nakagami for the win, it came down to the last lap between Rabat and Nakagami before the victory was decided. However, Nakagami was later disqualified for use of an illegal air filter. Brit Sam Lowes took an incredible sixth place finish on his Grand Prix debut.

Jack Miller took victory in the Moto3 race, becoming the first non-Spaniard to take victory in the class since Danny Kent at Valencia in 2012. Miller didn’t have an easy task however, with a five way battle for the lead until the final lap. Miller crossed the line ahead of Alex Marquez with Efren Vazquez third after an incredible drag to the line.