More risks for Marquez to beat Lorenzo in Mugello 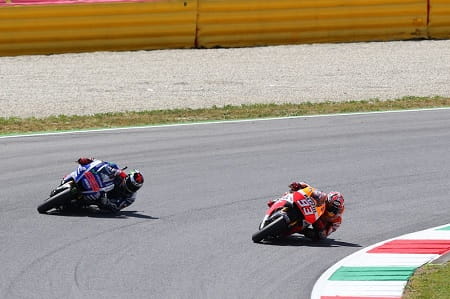 Marc Marquez has said he took ‘more risks’ in yesterday’s Italian Grand Prix than any other race this season. The twenty-one year old faced his toughest challenge yet this season from double world champion, Jorge Lorenzo.

Lorenzo, who has been off form so far this season, seemingly re-found his mojo for this weekend’s Grand Prix and took the challenge to Marquez in Sunday’s race. The Movistar Yamaha man led for the first seventeen laps before Marquez made his move but this time, it wasn’t as easy for the reigning World Champion to pull a gap on his competitors. Lorenzo gave it all he had to re-pass Marquez, resulting in a battle between the pair in the closing laps.

Right on Marquez’ tail until the end of the lap, Lorenzo went wide at the final corner ruling out victory. After crossing the line to take his sixth successive victory this season, Marquez commented in parc ferme how it had been the hardest race of the year.

“I am very happy with this win; Jorge and I had a really good battle and had a lot of fun out there!” said Marquez. “I wasn’t expecting the victory, because it has come at a circuit that I had marked on the calendar as being one for picking up Championship points – not thinking about winning the race. However, I saw that it would be possible and took more risks than at other races, because Jorge and Vale were very fast and we were finding it difficult to keep up the same pace.

“I think that we did a great job all weekend, and the change that we made to sixth gear in the warmup was very important too; we did this to help pass using a slipstream at the end of the straight. I am very pleased with how the entire weekend went.”