Marquez on top as Brits shine at Silverstone 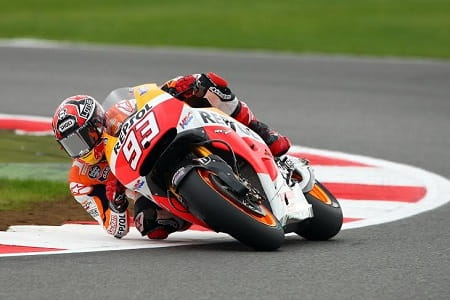 After losing out last time in Brno, Marc Marquez has come out of the blocks on fire as his factory rivals struggled on the opening day of the British Grand Prix at Silverstone.

The Spaniard set the fastest time in both of the day’s free practice sessions, half a second clear of his nearest challengers. With temperatures relatively low, a surge of open class bikes (plus the Ducatis) made their way into the top ten using the softer option tyre in this afternoon’s session, including impressive performances from Yonny Hernandez and Scott Redding in fifth and sixth respectively.

Winner last time out, Dani Pedrosa languished in ninth position after struggling with grip issues in the low track temperatures. Meanwhile the day was not far off disastrous for the Movistar Yamaha squad with both riders outside the top ten. Both Jorge Lorenzo (11th) and Valentino Rossi (14th) struggled with a lack of feel in the front end of their Yamaha YZR-M1s on corner entry. 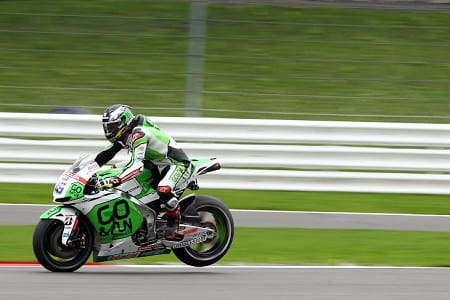 The forecast for Saturday is dry although it’s unclear whether temperatures will rise, which could play into the hands of the open category machines who will continue to be able to run the softer option tyre. Should Rossi, Lorenzo and Crutchlow be unable to improve their times tomorrow morning all three of them will have to fight in Q2 to progress to the final stage of qualifying.

Do you think this is the right move for Rea? or