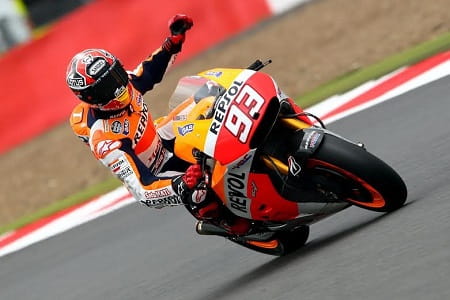 An impressive performance from Britain’s Scott Redding saw him top the pile in the first qualifying session, giving him chance to fight for pole in Q2. Joining Redding was team mate Alvaro Bautista, just a few hundredths behind on a faster machine.

Having been fastest in every session so far this weekend, it was no surprise for Marquez to take pole position but he faced stiff competition from Dovizioso, Lorenzo and Andrea Iannone.

The Spaniard took control of the session early on but a quick one from Jorge Lorenzo displaced the Honda from the top of the timesheets with just over a minute to go. Andrea Iannone was on for pole position until he highsided coming onto the Wellington straight. In the tow of Jorge Lorenzo, Ducati’s Andrea Dovizioso outpaced the Movistar Yamaha to take his third second placed start in a row. 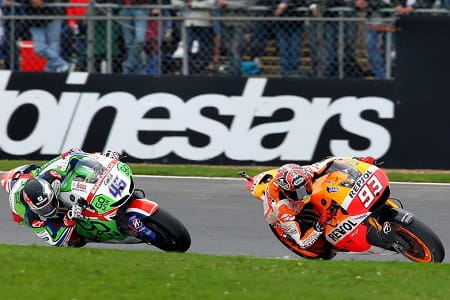 Bradley Smith is the leading Brit in seventh position ahead of teammate Pol Espargaro and Stefan Bradl, who was set back by two costly crashes in the final two free practice sessions. After crashing out, Iannone’s time was only good enough for tenth place ahead of a stellar performance from Scott Redding, who tried to catch a tow from Marc Marquez, ahead of his factory mounted teammate Alvaro Bautista.

Yonny Hernandez lines up thirteenth ahead of Karel Abraham with Britain’s Cal Crutchlow languishing in 13th without the updates given to Dovizioso and Iannone. Leon Camier crashed out of contention in Q1 after an impressive fun in FP4 leaving him to line up 18th on the grid for tomorrow’s race while Michael Laverty will start 20th.