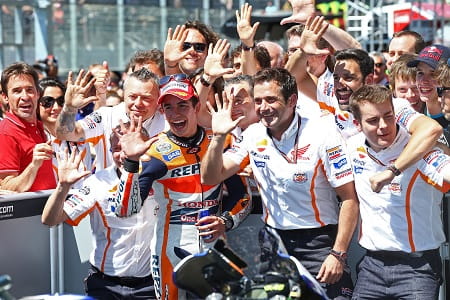 After storming to a fifth successive victory in Le Mans this weekend, Marc Marquez has been quick to point out that it’s not as easy as it looks.

Marquez’ fifth win means he’s taken victory in every MotoGP race so far this season with little to no challenge from competitors in four of the five outings. The twenty-one year old has been on great form, blowing his rivals away weekend after weekend, but is keen to point out it is hard work for himself and his Repsol Honda team despite it looking easy.

A bad start in Le Mans saw the Spaniard back in tenth place on the first lap but it didn’t take the World Champion long to catch up with race leader Valentino Rossi. Once he was past the Italian, he didn’t look back, building a gap of up to two seconds with Rossi having no answer.

The only race Marquez has been challenged by a rival this season was in Qatar, where Valentino Rossi ran the youngster to the line but since he has been untouchable. The Repsol Honda man charged to victory in Austin and Argentina before seeing off Valentino Rossi mid-race in Jerez to take his fourth victory in a row. Le Mans may have been his biggest challenge yet, fighting back from tenth place but the Spaniard still made it look easy…

“I am really happy with this win, which was different to the other victories.” Marquez explained.

“I made a mistake at the start; maybe I was too relaxed off the line, then when Jorge passed me I had to take a wide line otherwise we would have touched and as a result, many riders overtook me. However, from that moment on I began a really good comeback it was a lot of fun, ending in my fifth consecutive victory. Although it might look easy to people, we are working extremely hard and this is the reward for the whole team!”