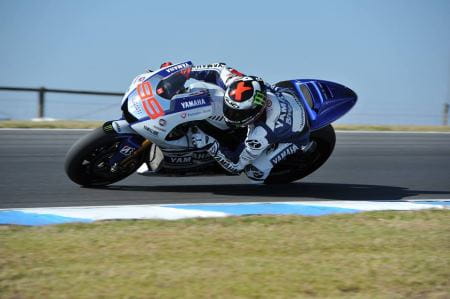 Jorge Lorenzo continued his domination of the Phillip Island tyre test in Australia today, shaving even more time off his fastest lap to top the pile for the third consecutive day. Lorenzo ended the test with a fastest lap of 1’29.068 ahead of Repsol Honda’s Dani Pedrosa three tenths back.

Valentino Rossi set the third fastest time of the third day, but sits fourth in the overall standings with Ducati’s Andrea Dovizioso having set a time on day 2 to secure him third place overall, just over three tenths slower than fastest man Lorenzo. The Italian only managed twenty-three laps on the final day due to ongoing sickness. Cal Crutchlow set the fourth fastest time on the final day but his fastest lap stood from Day 1 when he set the second fastest time.

Today was Valentino Rossi’s turn to test the new Yamaha faring, designed to reduce the effects of the notorious windy conditions at Phillip Island. The Doctor didn’t quite manage a full race simulation though, with his longest run set at thirteen laps.

Lorenzo’s fastest time is reported to have been posted on last year’s race tyre, while he did put in a full race simulation.

Tito Rabat continued to top the Moto2 times, although the Spaniard had two falls today the second of which destroyed his Marc VDS Kalex. Fortunately Rabat escaped relatively uninjured. His third day time was a fraction slower than his fastest lap from Day 2, just 3.1 seconds off Lorenzo’s pace on the slower Moto2 machine.  Rabat was nearly a second faster than Aspar’s Jordi Torres in second place on the final day, ahead of an injured Mika Kallio and former 125cc World Champion, Nico Terol.