'How to get your shoulder down' with Scott Redding Scott Redding has turned a few heads this weekend in Valencia with his insane lean angle through turn 11.

Double World Champion Marc Marquez is famed for his ability to touch his elbow down round corners but as the pictures show, Redding takes it to the next level with his elbow, upper arm and even his shoulder on the asphalt.

Having seen the many photos posted on social media on Friday evening, Redding dipped his head down on his cool down lap after qualifying on Saturday.

“I was just having a play about,” he said afterwards. “I’m enjoying the weekend, there’s no reason to stress so I’m having fun. I saw the pictures on Twitter last night and thought ‘jeez I’m quite close [to getting my head down]’ and I was talking with my girlfriend last and said I’ll drop it down! So I did, I dropped my head but I didn’t want it to touch the floor as Shark would kick my ass! When I did it, it felt like my head was upside down! It was fun. If I do well tomorrow in my last race with the helmet, maybe, just to get the photo… 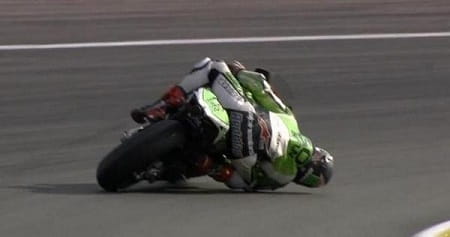 “I’ve wanted to touch my shoulder down since Barcelona, where I did it for the first time but no-one would believe me as there was no picture. The curbs there are also quite high so to be doing it here where it’s flat is pretty cool. It’s just my style, it’s no different to any corner but with the low speed you get more angle, you’re leaning at 60 degrees.

"I look [at the pictures] and it’s not as if I’m throwing my top body out that much, I’m trying to turn and have my ass off quite a lot like Marc and the other guys but because my top body is quite long, it’s just there. My knee is against the fairing so I can’t put my knee in anymore and I’m not resting my elbow on my knee like a lot of riders are doing, I’ve got it over my knee and I’m trying to get the bike on more of an angle. It’s kind of the limit for me in terms of lean angle!”

Redding showed strong pace in qualifying and will start tomorrow’s race as the top production Honda from 14th on the grid despite rival Hiroshi Aoyama being gifted the new, faster RC213V-RS this weekend. “I’m quite happy with how we’ve been going this weekend,” Redding continued. “I’m consistent lap after lap but I’ve been struggling with front grip again. We were using the harder front tyre yesterday and today it wasn’t working as the temperature dropped a bit. We struggled with skidding on the brakes so we used the soft tyre. We tried the dual compound tyre but I only have one, which we’ve now got seven laps on and I might have to consider it as a race tyre. We’re a little bit stuck with tyre choice for the race, I’m hoping the temperature comes up so we can use the soft tyre, as in reality I don’t want to use a seven lap old tyre for the race.”