Ducati boss confident of challenging for wins in 2015 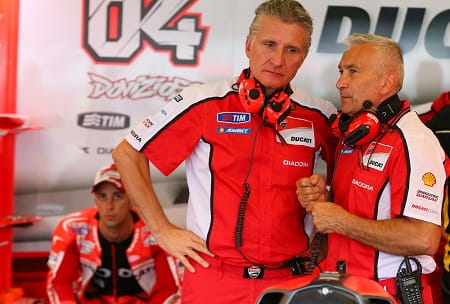 Ducati MotoGP boss Paolo Ciabatti has said the team are confident of being able to challenge for victories next season after a gigantic step forward in 2014.

The Bologna factory hasn’t won in MotoGP since Casey Stoner stood on the top step of the podium at Phillip Island in 2010. In fact, since then Ducati has only achieved a handful of podiums with the struggling Desmosedici, even with nine-time Grand Prix World Champion Valentino Rossi on board.

Ciabatti, who was heavily involved in Ducati’s World Superbike glory days, was brought into the team for 2014 alongside Corse legend Davide Tardozzi and Aprilia’s Gigi Dall’Inga to completely revamp the Italian squad.

Having not won a race in over three years, Ducati were granted open class concessions for the 2014 and 2015 seasons (a full explanation of the concessions can be found here), most importantly including free reign to continue developing their engines. MotoGP rules normally forbid factory teams from developing their engines throughout the season in an attempt to level the field, but in the case of Ducati, development is crucial if they’re to reach a similar level to Honda and Yamaha.

This has helped them make huge steps forward this season. In Valencia last year, the highest placed Desmoedici finished almost 40 seconds behind race winner Jorge Lorenzo. Now Ducati’s riders are consistently able to finish within ten seconds of the winner and have shown good pace in qualifying throughout the year with several front row starts and even a pole position in Motegi. 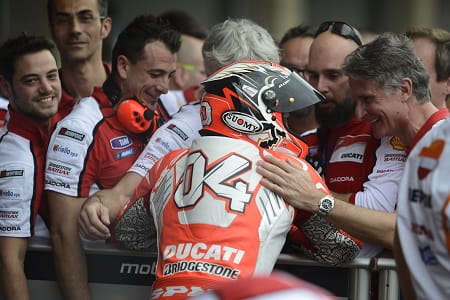 “We are quite pleased with this season, we have made a lot of progress throughout the year” said Ciabatti. “We have been allowed to keep developing our bike through the concessions but this is what we needed. In 2013 we had a very embarrassing gap to the top and we are within ten seconds of the winner and have proven we can be fast in qualifying too. We’ve had three podiums, two with Dovizioso and one with Cal, we were almost there in Phillip Island but you must go through the chequered flag to get that position and unfortunately he didn’t manage that.

“We need to work hard. There are four riders in a special league but we feel that this year Dovizioso has been so strong and so fast we are very, very pleased.”

Former Aprilia head honcho Gigi Dall’Igna was brought in this season to radically re-design the Desmosedici ahead of the 2015. While Ducati admit that the GP15’s debut is going to be later than planned with the bike not breaking cover until the Sepang test next February, they are confident it will help find the extra ten seconds they need when partnered with the two hungry Italians set to ride it.

“We have a brand new bike next year and a change in rider as Andrea Iannone joins the factory team” Ciabatti continued. “The new bike is a little bit late, it won’t be seen until Sepang but we prefer to start with things right rather than rushing the debut of a new bike and having to fix several things. It looks like we are going in the right direction and we are very confident of being able to challenge for race wins next year.”

Do you agree, can Ducati win?