Bridgestone to pull out of MotoGP after 2015 season 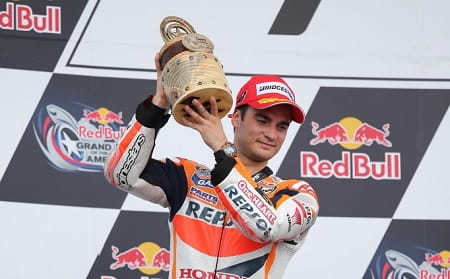 It has been announced that Bridgestone will pull out of MotoGP after the 2015 season. Rumours have been rife over the past couple of weeks as it became apparent that the Japanese company’s contract was due to expire at the end of this season, with former Grand Prix suppliers Michelin and Dunlop tipped to be fighting to replace Bridgestone as the spec-tyre manufacturer from 2016.

The company first made in-roads in MotoGP back in 2002 and took their first victory two years later in Brazil. Bridgestone’s success flourished in the years to follow, as the Japanese marque won world titles with Casey Stoner and Ducati in 2007 and Valentino Rossi and Yamaha in 2008. Following this, Bridgestone became MotoGP’s first official tyre supplier and has been the sole supplier of tyres to the MotoGP paddock ever since.

Bridgestone will stay on for one extra year, to allow a new tyre supplier to be ready in time for the 2016 season when it is expected a new, spec-tyre manufacturer will be announced. This could mean a return to the paddock by Michelin, who haven’t been seen since Bridgestone were awarded the spec-tyre deal in 2009. Dunlop could also be a major player for the new contract as the existing sole tyre provider for the Moto2 and Moto3 paddocks although there are also rumours of Pirelli, who currently supply the spec-tyre for Formula 1 and the World Superbike Championship, which is run by the same organisation as MotoGP: Dorna, stepping up to the plate. Tenders for a new tyre manufacturer have only just opened, so a decision will not be for a month or so.

"It is with some sadness that we will make our exit from MotoGP after such a prosperous participation in the sport” explained Kyota Futami, General Manager of Bridgestone’s Motorsport Department.

“Yet, having achieved everything we set out to do when we entered the championship over ten years ago, including sharing in many MotoGP World Championships, our company believes it is the right time to implement an exit strategy from the series. Over the next two seasons we will continue our world-class level of support to all the teams and riders, and will keep investing heavily in our MotoGP tyre development programme. We will continue to push the boundaries of motorcycle tyre development over the next two years to ensure that we leave the championship at the end of 2015 in the best way possible."