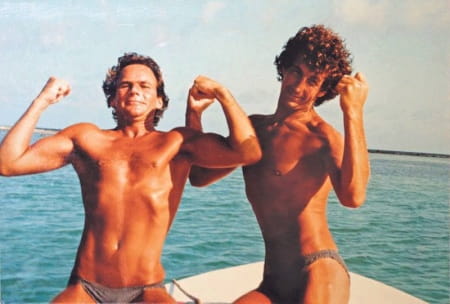 We used to go to Venezuela for a month and go water skiing and eating fish. That was our winter training, we didn’t bother with gyms, we just used to go water skiing. We’d go from the 1st until 31st January, get a speedboat and water skis. It would be my girlfriend and I, Stephanie Sheene and Barry and that was our training camp, once that had happened that was it for the year.

What do you think of the BT Sport MotoGP deal and do you want a job there?

Yes, I want a job there. I love the sport that I’m involved with and I wouldn’t want to leave. I think it was inevitable that it would happen as MotoGP has become very popular and in part this is courtesy of the BBC because they’ve put it into lots of households that wouldn’t normally get it and I guess I’d just say that’s the way sport’s going… if you want to watch sport you’ll have to pay for it. I’m slightly disappointed that it’s not going to get into some of the households it would have done with the BBC and there are a lot of people that won’t continue watching it. The perfect scenario would be if there was a similar deal that Sky and the BBC have with Formula 1, but you know that can’t happen.

Do you miss the 1970s when we could go to our local tracks and see our GP stars competing in the British championships?

Very much so, I thought it was wonderful when we had people like Giacomo Agostini coming over and racing at the bigger events in the UK. I do miss it but we’ll never see it again as most of our UK tracks are deemed as too dangerous by most top GP racers these days. What a lot of people don’t realise is the reason people like me, Barry Sheene, Phil Read etc raced in the UK was because we got paid a lot more in Britain than we did in Grand Prix. We’d go to Grand Prix for the status and kudos of being a World Championship rider but we got paid more to race in the UK.

Who first called you Stavros?

Barry Sheene in 1976. He somehow, I guess courtesy of my girlfriend at the time, got hold of a picture of me when I was about thirteen years old and I was fat, a porky little school kid and I also had curly hair. Back in those days there was a TV show called Kojak and in it was a bloke called Stavros who was fat with curly hair. It’s stuck with me ever since!

If you could manage a race team what bike would you run and who would be your two riders?

I would take Sam and Alex Lowes and I would use production Honda RCVs to kick them off in MotoGP.

Do you think Cal Crutchlow has jumped the gun a little by signing for Ducati, should he perhaps have waited until the end of the season to see what other developments might have occurred?

No I don’t think he should have waited until the end of the season as I don’t think anything else will come up, we’re sort of where we’re at now. I completely understand why he’s done it, he wanted to be on a factory bike, he wanted the kudos that goes with being on a factory bike, he wanted the salary that goes with it and I think he will make a better job of the Ducati than Dovizioso has done. I’m not knocking Dovizioso but I think Cal’s style will suit the Ducati, he’s got an aggressive style and I think he will get on well with it. I also think the timing is quite good as by now Ducati and Audi must be sick to death of the bike not performing. It can’t not improve, the formula in MotoGP allows you to do anything and I don’t believe that with the right amount of finance and effort that they can’t make that bike more competitive. Cal is also hungry to do well, so I think he’ll make a good job of it.

Which has been your favourite race to commentate on?

Who do you think is the greatest British racer of all time?

Tough question, I don’t think you can transcend from different generations. I never competed against or watched Mike Hailwood or Geoff Duke and people like that. That being said, if you ask me the greatest British racer was my mate Barry Sheene and that’s not because he was the greatest talent of all time but as an all-rounder, personality and an ambassador to the sport he is still in my eyes the greatest racer of the period.

How come you didn't age as well as Barry Sheene, when he crashed more often than you?

I have done, he’s not with us anymore and I’m still here! But before that, I didn’t have as much money for all the make-up that he had.

What is the story behind the registration number on your car?

I’ve got two registration plates, PEN15 and 60CK. For dirty minded people, these appear to say something… They were originally purchased when I was married to stop my wife driving my cars.

What was the most memorable moment in your racing career?

The most memorable moment was the biggest mistake in my career. It was when I was leading the British Grand Prix in 1977 and crashed out on the last lap with a three second lead.

What about scariest moment?

Crashing at Assen when I was flat out in sixth gear on a 750 Yamaha and I broke my leg. I was worried if I was ever going to stop…

You could win tickets to the British round of MotoGP at Silverstone, as we're giving away 500. All you have to do is create a free profile at BikeSocial.co.uk!