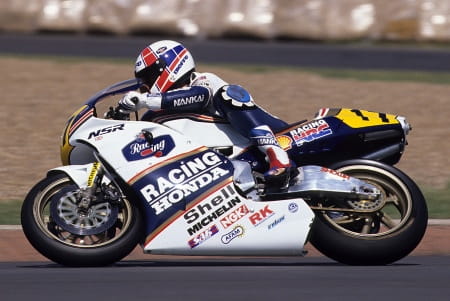 To mark ten years since 500cc bikes disappeared from the world championship grid, we’re putting your questions to some of the most memorable GP legends.  Here we talk to former 500GP and World Superbike rider, Roger Burnett.

I’d rather ride the bikes that I rode with the riders that I rode with, I have such happy memories from those times. Today’s bikes are very different, in some ways they are more difficult and in some ways they are easier. Setting up the electronics on today’s bikes is really difficult, but when set up correctly electronics can stop you from crashing so they can make it easier too. Back then there were no electronics to help, it was all down to you and I think that added to the excitement. That’s not to take anything away from the riders of today though; the likes of Lorenzo and Marquez are incredible. But riding a GP bike in those days on circuits such as Brno and Spa was just mind-blowing.

What is the proudest moment in your racing career?

Looking back, my proudest moment was an achievement I didn’t quite realise was as big as it was at the time. When you’re young you have a lot of ambition and want more, but looking back now I can say that winning the Senior TT in 1986 is the proudest moment in my career. There was lots of competition back then and things weren’t as safe as they are now (not that it’s that safe now either!) It’s a proud feeling to think back to that.

Do you have any regrets?

My biggest regret is not working hard enough when I raced and I’ve been punishing myself ever since. I’m not saying I didn’t take it seriously what I’m saying is I didn’t appreciate how much effort was required. If I had worked as hard as James [Toseland] did to win his two championships, who knows what I could have done?

What was the scariest moment in your career?

The scariest moment of my career, believe it or not – wasn’t on a bike. It was being in the USA in 1989 responsible for two factory Hondas and sharing transport with Terry Rymer when we realised the rent-a-truck containing all the bikes was no longer behind us on the way to the airport. We turned around to try and find it and came across my race wheels in the middle of the road with everything else scattered all over the place. Turns out Adrian Gorst, who was driving the truck had managed to flip it! To make matters worse, we had taken a short-cut and technically weren’t insured in the state we were driving in… It was all OK though, we got to the airport on time! I’ve had some scary moments on bikes, clipping the curb at the TT isn’t great but on a bike these things only last a split second, in America we were stood for an hour and a half with an over-turned truck and some very expensive motorcycles looking like we’d crashed them at the circuit!

To be honest, I wouldn’t say my hair was the same as it was before putting the helmet on! But I rode in an era where if you brushed your teeth and combed your hair, you had the mick taken out of you! They used to call me ‘hairnet Burnett’! But you know, I looked after my hair and now, years later I’ve still got it all, unlike a few others! [Laughs]

You could win one of 250 pairs of tickets to the Silverstone MotoGP, more info here.