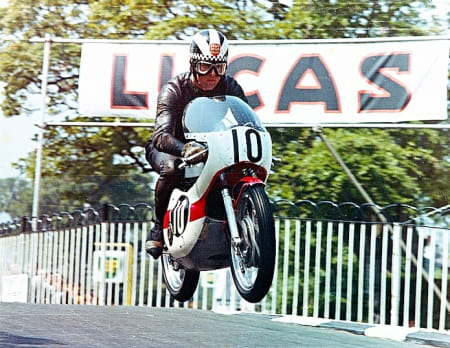 It has been ten years since 500GP bikes disappeared from the GP grid completely therefore to celebrate we are putting your questions to a series of 500GP legends. The first is twice 500cc champion, Phil Read MBE who won a total of fifty-two Grand Prix wins and eight victories at the Isle of Man TT.

What moment in your racing career, and life in general has scared you the most?

Riding in the Le Mans 24 hour race with oil leaking from my Honda was perhaps the most scary moment of my career. Not only was there oil on the rear tyre, but it was pitch black and I couldn’t stop, I just had to ride on. I had to tape my hands up so that they didn’t get blistered, so it was a pretty challenging. All in all, we finished in 10th position so it wasn’t that bad really!

If the World Superbike Championship had been around when you were racing would you have been up for giving it a try?

I’d have won it! When I was racing I did actually take part in a few Superbike races and led in Assen, as well as a couple of other rounds. I think I took part in two or three races in total in ‘76, but it wasn’t really a championship then.

Would you prefer to race the bikes today against the riders of today rather than the riders from your era? If not, why not?

I don’t know really, that’s quite difficult to answer. It was tough back then but I guess it’s just as tough now. The main difference then was that the bikes were all equal, so the focus was on the rider and it left it up to them to make the difference. Now, there are so many controls it makes it much more technical. The riders still push it to the absolute limit but the difference seems to be swerved towards the bike these days, taking the emphasis slightly off the ability of the rider.

Some of our Facebook fans think that in the last 10 years, the top flight of motorcycling has gone downhill. What do you think?

I don’t think that’s true at all. The quality is still there, I mean, Rossi’s been around for over 10 years now, so the standard’s definitely still high. Maybe there’s just not the same number of top quality riders that there were years ago – the top flight of motorcycling has just been filtered out more in recent years.

Another Facebook fan thinks MotoGP has gone downhill in recent years and would like to know what you think would make it better?

Many people have asked me this and it’s a difficult question to answer. One way you might make it more exciting would be to take off the traction control and all the extra technology the bikes have these days. Only thing is, there may be more accidents on the track if you remove them all! At least if you removed the extra controls it would be down to the riders and we could see if that would make it a more interesting race.

Another way to mix things up would be to replace the GP with the Moto2 race. Those riders don’t have the same electronic controls as they do in MotoGP, so if you banned that and replaced it with the Moto2 race you would have a more exciting series! There are four or five riders battling out for pole position each time, so it would make for a more nail-biting finish!

Do you think 2 strokes machinery makes for better riders?

I think both Agostini and I have proved that you can ride both a 4 and a 2 stroke! At the end of the day, if you’re a natural born rider and you have the ability, then it’s just two wheels and an engine and it doesn’t make much difference. The only thing was the Honda could be a bit vicious when the power came in, that made a bit of a difference – and caught a few people out!

Do you have any regrets from your racing career?

I have plenty. It’s always been a regret of mine that I couldn’t be involved in the British series with the Triumph and BSA Triples, as I was signed to MV Agusta it restricted me in what I could do. Another regret  of mine is that Yamaha asked Agostini and not me to ride the 500 Yamaha. That was something I would have loved to do.

One of my biggest regrets was that I never made Premier Helmets into a top brand when I had the chance in the mid ‘70s. I had so much going on at the time, and racing commitments meant that I never had the time to put the extra effort into it. If I’d have had more time or a proper manager I could put in charge to make sure it realised its potential, it may have been a different story.

Of course, I will always regret the many friends I lost on the circuit.

What was the proudest moment in your career?

Winning my first TT at the Isle of Man has to be up there! Also, my first World Championship at Monza and then beating Agostini in the 500! My proudest achievements though are my four sons; all have gone on to excel in their chosen careers. My eldest fought in Iraq and is now a 1st Senior Officer, Graham is the Dunlop Competition Manager and Phil Junior is the Marketing Manager for Piaggio, while Rocky is an IT Consultant.

You’re heading to the Classic TT this year to take part in a lap of honour, are you looking forward to it?

Yes, very much so! There’s a lot happening this year, so it’s bound to be a great event. I actually wanted to take part in the 250 race but my entry was withdrawn without explanation. I think I could have won that actually, as my ex-Factory 250 four cylinder Yamaha looked like it would be the fastest out there – which is what you want at my age!

It’s been quite a few years since we last had a British champion in the premier class. Why do you think this is?

I think DORNA tend to favour and support the Spanish and Italian riders, which leaves our British riders without the support they need. Tech 3 saw the potential with Cal Crutchlow and employed him, and he’s shown he’s brilliant and up for the job! I think he just needs a top factory machine now and he’ll go to the top.

We have some brilliant riders in the BSB, and there’s a lot of potential for the Brits out there, but they don’t seem as connected to the GP and the channels you have to follow to get there. Bradley Smith is another rider who’s demonstrated a lot of potential, and he’s working his way up. He’s not shown as much as we would have liked this year, but perhaps another full season and he’ll be ready to show us what he’s got.