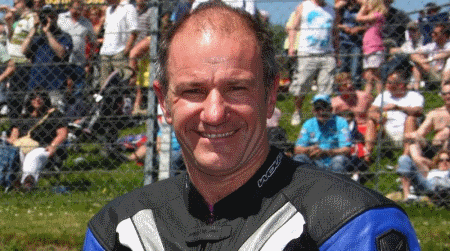 As part of our "You ask, we answer" series with 500 GP legends, we put your questions to Niall MacKenzie. Here's what he had to say:

Did you have any superstitions or rituals before a race?

Purple RS Taichi socks, they started wearing out that's when I knew it was time to retire!

We used to love watching you carve your way through to the front of a race having lost places at the start. What was it that you couldn't get right at a start?

My reactions on the start line were as good as any rider but I was too steady on lap one due to a few first lap crashes. Luckily I was fast enough to get back to the front!

Was it more difficult to race or to watch your kids racing?

Much more difficult watching my own flesh and blood. As a parent you're programmed to protect them, not put them in danger. When it was me racing I had total control.

What made you to decide to retire?

I had a big off when my throttle stuck open at Cadwell and for the first time ever thought my sport was a bit dangerous. I asked Roger Burnett when I will know when to retire and he said the fact you're even asking means now is the time.

What bikes do you ride these days?

I ride TTR 125s in my field and all kinds of sports bikes while instructing with Focused Events. I'm off for a Scottish Island hopping tour soon with some old racers on the latest KTM Adventure.

Why is it so hard to get anywhere in Scottish racing?

Why did you use an unconventional line into the first turn at Donington?

Ha, I had a few sneaky lines that worked at some tracks, if you can find something different that works then you can out fix the opposition

Proudest moment in your career?

My first 500cc GP rostrum in Austria. My mum was abroad for the 1st time and I never dreamt in a million years one day I would stand on a podium with Wayne Gardner and Randy Mamola.

Do you have any regrets from your career?

No regrets, I'm a council estate kid that would have been happy to get a job in the local Paper Mill when I left school... Luckily they turned me down.