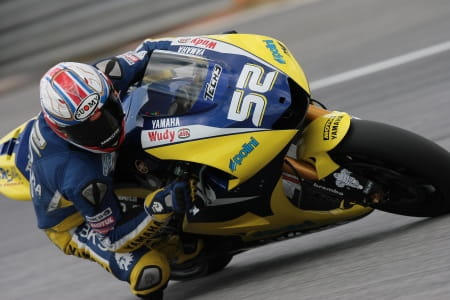 As part of our ‘You ask, GP stars answer’ series, we put your questions to double World Superbike champion and former MotoGP racer James Toseland. Here’s what he had to say:

Do you feel you had a fair shot at MotoGP?

Yeah I had a fair shot, I was given the bike I was given by Tech3 and they did the best job they could for me with what they had in their team and it was a fantastic team but unfortunately it just wasn’t a competitive package for those two years. That wasn’t anybody’s fault that was just timing. The only thing I would have liked is a factory bike as after the way I was riding in the first year and my confidence from winning the world superbike championship in 2007 I think I would have been right up there. In my first year I qualified on the front two rows in quite a few races and on the slowest bike on the grid. There was certainly potential for more!

Did you ever consider riding the TT?

No, I followed John McGuinness round a few times on the open roads and I can see why it’s such an appeal for the riders. It’s an amazing track to go round but with my personality and the way I rode a motorcycle, I don’t think I’d have lasted long round there. The lack of margin on being able to crash worried me, I knew that on most corners it would be a possibility to me.

Do you enjoy the music as much as you enjoyed the racing?

I don’t think I’ll ever replace the thrill of racing a bike and over the last two years since retiring I’ve come to terms with that being the case. I’ll always miss it for the rest of my life but I have to put it to the back of my mind as if it’s at the forefront it would do my head in and I’d be in a bad place. The music was my first love before racing and I’m really enjoying the prospect of doing it on a really good level, we have management now and the single is coming out on October 6, the album is coming out next year and there’s a real plan of trying to make a success of that now as well.

If you could change one thing from your racing career what would it be?

Nothing, really. It was what it was and I put everything into it and I enjoyed every moment of it, the good and the bad, because the bad just made you appreciate it even more. We had ups and downs but mainly it was up and to lift those two trophies in ’04 and ’07 I was very privileged to actually achieve the pinnacle and lift the trophy. A lot of amazing riders have never lifted that trophy but I did it twice and unless you lift that trophy, I can’t describe what it feels like but I had a fantastic career.

What road bikes do you own?

What were the biggest differences between the Michelin tyres from your first year in MotoGP and the Bridgestones in the second year?

The qualifiers. The Michelin qualifiers were out of this world and even on the slowest bike on the grid I was able to qualify really well. When you can qualify well you’re going to have a decent race and when it all went to Bridgestones and there were no qualifiers all of a sudden I had the same grip as everyone else and the slowest bike, it was really difficult to get a good qualifying position.

How did it feel to battle with Valentino Rossi at Phillip Island in 2008?

It was a fantastic moment but when I was on the track I didn’t regard Rossi as any different to the likes of Bayliss, Biaggi and Nori Haga who’d I’d race with for many years. On that particular day it was Rossi. I’ll always look back on it with fondness as he is the most successful racer ever and now, I’m really proud that my efforts put me in that position.

What do you think of Cal Crutchlow’s decision to ride for Ducati?

I think it’s a decision that he’s been forced into with the current climate of motorcycling. In the satellite teams the teams are finding it difficult to fund going racing which means the wages aren’t very good. He’s showing himself to be one of the top five, six riders in MotoGP and if he stays where he is he’s not going to earn the living he needs to. He’s only got another four, five years maximum in MotoGP and if he stays where he is he might not be able to retire comfortably enough to not have to go working again! If he injures himself in that process and can’t work then he’s in a difficult position as a motorcycle racer. The Ducati decision is obviously down to money as well as anything else, but also on the flip side of it he has nothing to lose riding a Ducati and if he does deliver it’ll look like he’s making the difference and it’s him that’s a good rider. He’s got the benefit of the money, he’s got the benefit of nobody expecting much, but the one tough thing is that he’s got to try and beat Andrea Dovizioso which is not an easy task. He didn’t find it that easy on a Yamaha and I don’t think he’s going to find it that easy on the Ducati when Andrea has a year’s experience on the bike. But it’s a risk he couldn’t not take with things being as they are.

Have any teams tried to tempt you back to racing since your retirement?

No, my wrist doesn’t bend at all. There’s no movement in it whatsoever and I’ve been in the paddock a few times to meet all my friends and the team managers and the rest and it’s obvious that I wouldn’t be able to ride competitively with it so you know, unfortunately not.

Do you think motorcycle racing gets the coverage it deserves in the general press?

It’s never been up there with Formula 1, as a comparison to motorsport. I don’t think it’ll ever be up there with football and cricket etc. It could certainly be helped in the UK for sure, Cal’s doing a great job this year but it’s the first year. To get exposure, to get everybody behind it he needs to consistently be up there for at least two or three years before everybody gets confident that there’s a British rider to reel in support. It’s amazing how long it takes really, but it’s down to the fans, the press, the TV and everything. I really hope that Cal is going to do it for a few years to get the exposure.

What would you say was your best ever race?

I think my best ever races were possibly the races at Magny Cours in 2004. Whoever won that day won the championship and I was only 23 years old. To take that pressure on board and have a team behind me that wanted Regis [Laconi] to win the championship was hard. My own personal team was fighting for me, so with the strength of that and the way I conducted myself on that day that was best. I won the first race and then finished second, so to win the championship in those circumstances it was a big day.

Was there another racer you enjoyed beating the most?

Well that’s always someone that you’re not keen on! Although, to be fair the one really was Bayliss but that was just because if I beat Bayliss, I knew I’d ridden really well. I had to be right on my game to beat someone like Bayliss as he’s one of the most tenacious, gritty little fellas to beat. One of my best rides was Australia when I beat in him 2007, to beat Troy round there really did take some effort. It wasn’t pleasurable in any other way than knowing that I’d ridden well.