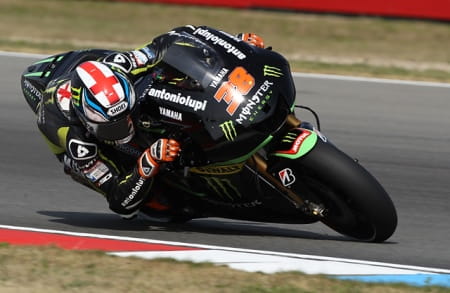 On Thursday in Misano, Yamaha revealed their partners for the next two years in MotoGP. As would be expected, Herve Poncheral’s Tech 3 squad are to continue as the Japanese manufacturer’s  official satellite effort, having already had a Yamaha contracted rider placed in their midst for 2014.

Moto2 Championship contender, Pol Espargaro will join Bradley Smith in the French-run team next year, in place of Cal Crutchlow who departs for Ducati. The team will continue to field prototype Yamaha YZR-M1s, not too dissimilar to those ridden by factory riders Jorge Lorenzo and Valentino Rossi.

Yamaha’s Lin Jarvis comments: “I’m really very happy to continue our relationship with Herve Poncharal and the entire Tech3 Team. We have enjoyed a verysuccessful partnership for more than a decade and have shared many memorable moments over the years. The MonsterYamaha Tech3 Team continues to perform as the top ranking satellite Team in the MotoGP class and their riders are frequently scoring excellent results and providing great excitement for the MotoGP fans.”

However it doesn’t end there. Yamaha have also announced a new partner for 2014: NGM Mobile Forward Racing. The Giovanni Cuzari run-outfit will campaign two Yamaha YZR-M1s next year. Based on the 2013 bike the NGM machine will run using the DORNA spec-ECU, be fitted with an Akrapovic exhaust and British manufacturer FTR will be responsible for completion. As a non-MSMA entry, the NGM Yamaha team will be allowed four extra litres of fuel and the option of a softer tyre – similar to the current ‘CRT’ teams and 2014 Honda production racer. Many, including Yamaha, fear the potential of a Yamaha M1 with extra fuel and softer tyres, albeit on the spec-ECU.

Riders for the NGM squad are yet to be confirmed; however there are strong rumours that Aleix Esparago is trying to get out of his contract with Jorge ‘Aspar’ Martinez and Aprilia to join the team. The team may well utilise the Yamaha experience of their current rider, Colin Edwards or perhaps bring in someone from the World Superbike paddock, such as Marco Melandri with whom the team have strong links from their Hayate Racing days.