What does Suzuki delaying their return mean for Crutchlow? 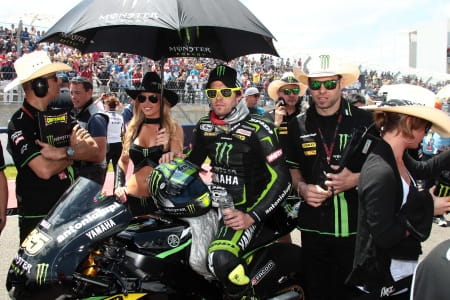 After Ducati shunned him in favour of Andrea Dovizioso for the 2013 MotoGP season, Cal Crutchlow was left with little other option but to remain with Herve Poncheral’s Tech 3 Yamaha squad. It’s turned out pretty well for the Brit so far, currently sitting 4th in the World Championship ahead of factory Yamaha counterpart and nine-time champion Valentino Rossi.

Crutchlow’s qualifying performances have shown the 2009 World Supersport champion can be as fast over one lap, if not faster, than the likes of Jorge Lorenzo and Dani Pedrosa. With MotoGP as it is, it’s almost impossible for a non-factory rider to win a Grand Prix. A satellite rider hasn’t won a race since 2006 and while there may be a glimmer of hope that Crutchlow could change that this year, for him to consistently challenge at the front it’s likely he’ll need a factory bike.

Crutchlow made it clear last year that what he wanted was a factory ride and if Yamaha weren’t prepared to give him one, he was fully prepared to leave. With rumours of Yamaha bringing Moto2 rider Pol Espargaro into the Tech 3 team for 2014 and Bradley Smith on a two-year deal it had started to look like the Coventry man could have no choice but to leave the Japanese manufacturer for next season.

Rumours had placed Crutchlow with the return of Suzuki for 2014 although it was announced the other day that they wouldn’t make their return until a year later. Unless Crutchlow was to sign as a development rider, this rules out Suzuki as an option, for now at least.

There may be a seat available at Ducati next year as Nicky Hayden’s contract is up at the end of this season and with Ducati starting to visibly improve perhaps this is a viable option for the Brit? However it is unknown how likely it is that Ducati will want to dispose of Nicky Hayden who has ridden with the team since 2009. Also unknown is whether Crutchlow would be willing to switch to the team he so publicly criticised after their handling of the negotiations last year.

It had been rumoured that Ducati’s new German owner, Audi, were keen to get Stefan Bradl on board, although he’s struggled to perform so far this season with a plethora of crashes. This would mean the German’s factory-supported LCR Honda could be up for grabs, but if Crutchlow is looking to eventually find a full factory seat he could find the situation at Honda all too similar to the one he’s in at Yamaha and at the moment, the post-2014 future of Dani Pedrosa is looking more favourable than that of Valentino Rossi…

Having taken only one podium since his return, there are vague whispers of Rossi retiring at the end of the year. Obviously if this were to happen there would be a direct path to the Factory Yamaha team for Crutchlow. However this is quite an unlikely scenario; the Italian made it clear last year he wanted to race in MotoGP for at least two more years, but more recently rumours have linked Rossi to a WSBK switch. Crutchlow has out-qualified Rossi at every round so far, beating him on track three times out of six and current form would suggest this pattern is set to continue.

With the Pol Espargaro rumours quietening up recently, it could be the case that Yamaha are reconsidering their options given Crutchlow’s recent performance.

He’ll certainly have Dorna on his side; a fast Brit in MotoGP is invaluable as history has shown. If you ask us, we think Crutchlow will be on a Yamaha again next season; they’d be stupid not to keep him.