Suzuki to return to MotoGP... a year later than planned 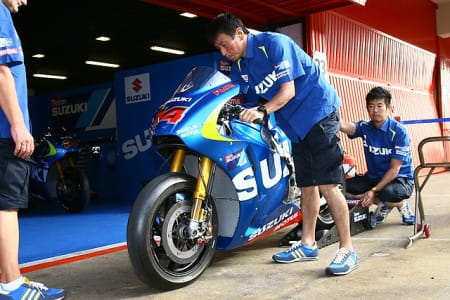 Suzuki has announced its return to the MotoGP paddock – but it will be a year later than expected. The Japanese manufacturer ‘temporarily’ left MotoGP in 2011 and rumours of their return have circulated since. Over the past year, there has been testing of a brand new prototype for the planned return, with rumours pointing towards 2014. However, today at the first public test in Catalunya, the squad – to be headed by former Yamaha man Davide Brivio – have announced they will return to the paddock in 2015.

It has been confirmed that Randy de Puniet, who has already tested for the team will continue as the development rider and the machine will be a 1000cc inline four. A statement released this morning reads:

"Suzuki Motor Corporation will return to FIM Road Racing Grand Prix MotoGP in 2015.  After two years suspension since 2012, Suzuki Motor Corporation has organised its test team to undergo more practical running tests at its advanced development stage and will participate in the official joint testing to be held at the Catalunya circuit in Spain.

Through continuing running tests at the circuits inside and outside Japan for further development and refinement, Suzuki Motor Corporation will participate again in MotoGP racing from 2015.

The outline of testing team and racing machine to be developed are as follows:

Suzuki last won a race with Chris Vermeulen in 2007, their only victory in the 4-stroke MotoGP era.