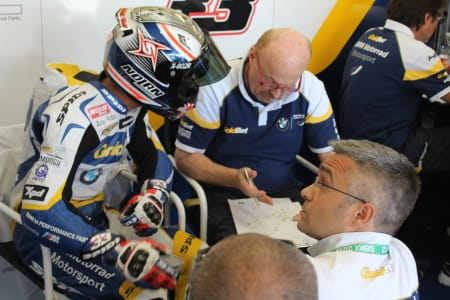 Just days after news that Valentino Rossi would sensationally split from Jeremy Burgess for the 2015 MotoGP season, Yamaha have announced a replacement for the Australian.

Silvano Galbusera is to take on the role, starting today as post-season testing gets underway at Valencia. Rossi ditched Burgess stating he felt the need to try a new direction. Galbusera has worked in racing since 1979, where he began his career with Gilera. He moved to the 500cc championship in 1994 with Cagiva, working with John Kocinski. He then moved to Yamaha, where he remained until 2011, working as both a Crew Chief and Technical Director in the World Superbike effort, with riders such as Cal Crutchlow, Ben Spies, Noriyuki Haga and Troy Corser.

After Yamaha’s withdrawal from World Superbikes after 2011, Gilbusera moved to BMW with Marco Melandri with whom he worked alongside until the end of this season.

“I’d like to thank Yamaha and Valentino for this great opportunity to work close to such a multi titled, high level champion” said Gilbusera. “I’m happy to be back in the Yamaha family and to have an opportunity in such a successful team that is always at the top.”