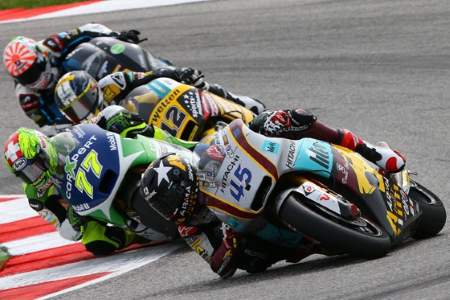 Despite seeing his Moto2 Championship lead cut to 23 points after a 6th place finish at the San Marino GP, Britain's Scott Redding reminded positive and focused on the task ahead of him over the final 5 rounds of the 2013 season.

Throughout the free practice sessions Redding was setting competitive times but couldn't find the extra few tenths to top the leader board.  The test that the team attended at Vallelunga earlier in the week didn't result in any changes for Missano and the team instead reverted to a previous set-up.  Scott ended Saturday's qualifying session in 5th place, the middle of the second row.

The Kalex-chassied, Honda-powered MarcVDS bike was struggling to pull out of the slower corners all weekend which was having ramifications on Scott's ability to compete down the fast straight and therefore the Gloucestershire man was having to push harder in the corners and using new Dunlop's up.

Speaking to Bike Social as he headed for his training camp in Barcelona ahead if the next round at Aragon, Scott said "I like the Misano circuit and even though I was being as aggressive as I could, we struggled for top speed and those guys were just pulling away down the back straight".

Redding got off the line reasonably enough at the start of the race but was calculated enough to choose the right line around turns one and two which saw him up to fourth and challenging Esteve Rabat for third whilst pole man and Championship rival Pol Espargaro and Takaagi Nakagami fought it out at the front.  Scott wasn't able to hang on to fourth although it still took Dominique Aegerter's best efforts get past the 20 year old Brit.  Luthi and Zarco followed but as Luthi closed in on Rabat, Redding didn't let the other two out of his sight and knowing that he needed to fight hard for every point, he made a last corner move on Zarco to earn himself 10 points for 6th place.  It proved important because heading in to the final lap Espargaro made a move on Nakagami to lead and eventually win the race.

"I wanted to get as many points as possible, I felt edgy pushing the front end but was trying to get in front of both of them. I was more confident on the brakes going into the final turn and planned to make a lunge on both of them but I had to be calculated because there's always the risk of making a move and not ending up with anything. Every point is vital."  Said Redding.

Looking ahead to the next round in Spain at Aragon, Scott knows what he has to do, "I like Aragon, we just need to get onto the back straight nicely, if I can get a good run onto there I think we will be good to push for a podium. I'd like to beat Pol at his home race but I have to concentrate on my own race and do my own job."

The Moto2 team's owner, Marc van der Staaten, was seen yet again in the pit garage cheering on the young British charger and Scott was quick to praise him for his efforts, "He's helped me so much and we are close. I would have a liked to have done something with him for next year but I hope he will be cheering me on!"