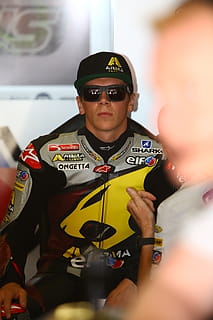 Following a solid fourth position finish in Catalunya today to add to his points tally and maintain his championship lead, we caught up with Scott Redding to find out how he was feeling about the result and what he’s been up to off the track…

What have you been doing since the win in Mugello?

We did the test on the Monday straight after the race, then went to Pomposa in Italy and did some supermoto over there, which was good. We then drove to a friend’s house in the south of France and relaxed a bit, enjoyed the weather and did some training, then made our way to Barcelona, where I did a bit more supermoto, for fun with friends, before heading here ready for the racing.

You ride a bike almost every weekend in Moto2 and when you’re not doing that you seem to be on a supermoto bike. Is it a bit of relaxation for you?

Yes, I like to ride bikes for fun, and not always just racing. I like to be able to go out and come in whenever I want and there’s no pressure. It’s good because I like to ride bikes and I’m good at it, so it’s nice to be on a bike and not worry about set-up; just go ride the hell out of it

You left Mugello with a 43-point lead in the championship, what were your thoughts coming into the Catalunya weekend at the track that in the past has been a difficult one for you?

To be honest, I’m actually quite happy with the result we got, we came 4th today even though I really didn’t feel comfortable all weekend. We topped the warm-up, were second in qualifying and we did have some good sessions, which was quite surprising because there isn’t one corner on this track where I actually feel comfortable, let alone where the bike’s not working to its full potential, so to come away with 4th is not bad. I think we’ll bounce back in Assen because that’s a good track for me, I was on the podium last year and I really like the circuit.

What are you going to be doing between now and Assen?

Have a guess…we’re going to go to Alcaraz in Spain on Tuesday to do a bit of supermoto with Oliveira, Sissis, Ajo, Khairuddin and some other guys and then going up to Spa on Friday to do some more supermoto, before having a go in a car there on Saturday and Sunday.

It’s not just any car though is it…It’s the DTM taxi car, the M3 GT4, which is going to be quite quick around Spa?

It will be a big change because you spend most the time when you’re not driving around in your camper, driving your two-seater van don’t you?

Yes, I’ve got the Volkswagen Caddy back home, which I can get 2 motocross bikes in the back to yet again go riding. It’s my little love wagon and it’s still got four wheels and a steering wheel so it can’t be that different! I don’t really know how it works because I’ve never driven a car fast, so the DTM drive will be a new experience for me.

Are you looking forward to it or are you a little bit nervous?

I’m a little bit nervous, but it’s still going to be fun. Overtaking in a car is going to be interesting, because I’m used to having so many centimetres under me, so I’ll have to pay attention with a car that’s probably more than two metres wide. I’m probably going to run on to the grass a few times!