Scott Redding has today been confirmed to ride in MotoGP with the Gresini Honda Team.  An announcement made at Silverstone ahead of the British Grand Prix stated that the 20-year old has signed a 2 year deal to initially ride a production RCV1000R Honda during 2014. 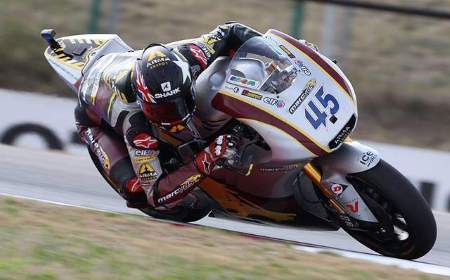 Fausto Gresini’s team will continue to run Alvaro Bautista on the existing prototype Honda which is almost identical to the full HRC factory bike ridden by Dani Pedrosa and Marc Marquez.  Meanwhile, Redding will be aboard the new and as yet unnamed production machine, one of only five to be built and sold by HRC (Honda Racing Corporation) with an expected price tag of around €1m.

The initial two year deal will see Bike-Social sponsored Redding making a move onto the full prototype machine in 2015 although should Bautista’s results or form go against him in 2014 then the Brit will be in pole position to take over.

At the beginning of August whilst speaking at a BT Sport event the Moto2 championship leader confirmed a move up to join the elite in MotoGP and with a 21 point led in the championship following six podium finishes including two wins in the 10 races so far this season.  His consistency and mature riding has been rewarded with points finishes in every round.

Redding said in a statement from Gresini, "I am looking forward to the challenge of MotoGP next season. I’ll be racing alongside the best riders in the world, aboard the brand new Honda RCV1000R, so I know already how steep a learning curve it’s going to be. This was why it was so important to me that I made this step with an experienced team, and there are few more experienced in the MotoGP paddock than Team GO&FUN Honda Gresini. But my focus now is on winning the Moto2 World Championship for Marc van der Straten, without whose support over the past four years I wouldn’t even have been given this opportunity to move up to the premier class.”

Honda's production bike will be produced with an engine configuration similar to Honda's RC213V prototype bike albeit using conventional valve springs rather than pneumatic valves, a lower spec gearbox instead of Honda's seamless transmission and it will be permitted to use the 24 litre fuel tank allowance.  The bike will be fitted with Nissin brakes and Showa suspension as standard although the purchasing teams are permitted to replace these whilst remaining within the regulations.

Last summer, Redding tested Valentino Rossi’s Ducati Desmosedici at Mugello and in a recent interview with Bike Social compared the differences between a Moto2 bike and the MotoGP machine as “as different as your local Ford Fiesta and an F1 car!  It is totally different – you have the technology, the tyres, the carbon brakes, it’s just a never-ending list of things you have got.”

He also confirmed that he has a chance of being MotoGP world champion by the age of 24: “I would like to think I can be, especially after this season having a good test of leading the championship and fighting for victories.  Finding that mentality that you are going to be a world champion and want it that bad, if you can carry that underneath you with a good bike, then you end up with people like Lorenzo, Rossi & Stoner.”