Redding: “To miss out on the championship like this really sucks” 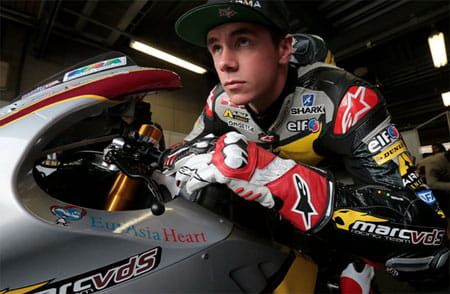 Scott Redding’s Moto2 title hopes were thrown into doubt after he fell during qualifying practice at Phillip Island suffering a broken wrist. Just five days later it was announced the twenty year old would attempt to ride at the next round in Motegi, meaning he’d be taking to track just six days after the accident. Following extensive delays because of the weather, the Moto2 riders finally took to track on the Saturday for qualifying. In the wet, Redding was instantly fast and as high as second at one point but as the circuit dried out the Brit made the wise decision not to risk it as there were still damp patches.

After qualifying fifteenth, Redding went into the race looking for a strong result to push the championship battle to Valencia. However, after making a great start drama struck before the second corner.

“I made a good start and picked up quite a few positions” explained Redding.

“Then as I was exiting turn one I saw people shutting off so I shut off as well and went to go left but Marinalarena tried to go round the outside of Gino Rea which pushed Gino into Rabat’s bike and stopped me from going where I wanted to meaning I had to go right and then Rabat appeared from behind his bike so I went to go left again to avoid him but hit the bike and took off.”

Scott fell hard on the asphalt, bouncing several times before coming to a rest. Fortunately he managed to avoid serious injury:

“I'm not really in the best of shapes, I managed to save my broken wrist but everywhere feels pretty bad to be honest. My back, my arms and legs all took a good beating but nothing too major fortunately.”

“I'm quite disappointed, we tried so hard throughout the season and in the end we lost the championship due to two crashes and the second one wasn't my fault; just wrong the wrong place and time. To miss out on a championship because of injury and non-starts really sucks as we were really willing to try, I came back after the broken wrist to race just 5 days later and I just got knocked down again, it's hard times!”

On returning to racing as soon as possible, Redding adds:

“I wanted to come back for the Sunday in Australia but the medical staff wouldn't let me so as soon as I left the circuit in the back of the ambulance my first priority was to be back for Japan whatever the pain. Once the wrist had been pinned in my head I was strong enough to race in Japan.

My plan now is to get fit for Valencia but I want to be strong to have a good end of the season and be ready for the MotoGP bike afterwards. However after the crash and a lot of flying afterwards I'm still not feeling that great. I'm struggling to sit down and stand up, I'm not in a great state to be honest. There's nothing I can do to make it better either as it's not as though I've just hurt one part of my body and can work on the other parts. I can't do anything because everything is hurting so I've just got to try and rest but I hate doing nothing so I'll try and get training as soon as I can.

Redding, who has signed a two-year deal with Gresini Honda in MotoGP beginning next year is scheduled to test the Honda production racer after the Valencian Grand Prix.

“The plan is to ride the MotoGP bike at the test in Valencia but we'll have to see how the wrist is. There still isn't a lot of movement in it but hopefully it'll be recovered well by next week.”