Scott Redding: “The tyre turned on the rim” 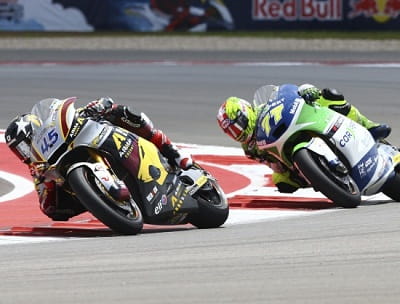 Bike Social-supported Moto2 rider Scott Redding has revealed just how bad the grip levels were in the Moto2 race at Austin, Texas on Sunday, telling Bike Social that the tyre turned on the rim and the rear used so much rubber there was only 2mm of rubber before it went down to the canvas.

Marc VDS rider, Scott Redding started from pole position for the first time in his 86-long GP career, and was so fast in qualifying that many thought his maiden victory in Moto2 was in the bag.

Sadly, a rapidly deteriorating front and rear tyre, which Redding had expressed concerns about earlier in the weekend, meant he couldn’t hold his incredible pace. Lap times in the race dropped from running in 2m 10s per lap in qualifying to around 2m 12s in the race.

Riding one of his most mature races yet, Redding opted to sit back and ride with the championship in mind, taking fifth place and taking full advantage of championship rival Espargaro crashing out

It leaves him first in the championship, with a four point lead on top of the Moto2 world championship table. Terol, Rabat and Kallio are joint second on 27 points to Redding’s 31.

Redding spoke to Bike Social exclusively for his regular blog, as he waited to board his plane from the USA back to the UK. He said:

“Yeah, we had quite a big problem with the tyre really, it turned on the rim and we lost a lot of rubber there. There was 2mm of rubber left until the canvas and we had no grip and so much chatter from it.

To be honest, I don’t think the tyres really suited it (the COTA track - ed), the guys with the Suter chassis seemed to get it working quite well with them, and they didn’t have too much trouble, but the guys on the Kalex, they had similar sort of problems,  it was at the next level of problems, you know.

Obviously I’ve ridden the Suter before and they had a lot of front feel and not so much rear grip, and I don’t think it was stressing the rear tyre as much you know. They weren’t that fast, but they were consistent on those tyres.

I went off the start and had a false neutral, because when you’re going back to first gear all the time you always hit neutral, so I had a false neutral. Then I went back and got back up to the front and in doing so I killed the tyre, a little bit. The track temperature also went up again and there was just no grip again.

I said before I went to Texas that I wanted to go into Jerez either level with Espargaro or in front of him, I wanted to put a bit of pressure on him you know? And we’ve come away with doing that, which is good.

We’re now back to the circuits that we know and we know that the tyres will work there, we’re just going to work a little bit more to get more life out of them In Texas it was just the circuit layout; not that much grip, which had long corners on the right side and it was just killing them off.

From here on in we should be back to normal. See you in Jerez.”