Redding on MotoGP: "You have to go there and prove a point from day one."

Bike Social caught up with Moto2 championship leader Scott Redding during the mid-season break to find out what his plans are for next season and his thoughts on leading the championship.

With a lead of 23 point lead, would you say the 2013 Moto2 Championship is yours to lose?

Pol (Espargaro, 2nd place) has been pretty strong, but I knew that he would be – I knew that a rider of his level isn’t going to lose what he has already got.  He has always been fast and he has had a good past few races, and I had a good battle with him in Assen.  In Sachsenring I had a problem with a tyre, that’s racing – it can go either way, we just need to get back on top of our game and keep and maintain what we did at the beginning of the season. 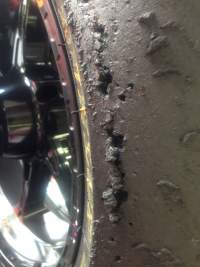 You’ve been quoted as saying ‘confidence just seems to make everything that little bit easier.’  Has that been the key to your success this season?

I think that it’s more preparation that started the run of success.  When you get the confidence it just seems to help going into a race knowing that you do have a chance of winning, and do have a chance of being on the podium – that’s what makes a big difference to me.

Has there been a defining moment this season when you’ve thought ‘I’m on top of my game now and this is my time to step up to the plate’?

You’ve had some great tussles on the track this season.  Who is the rider you least like to see on your tail, and why?

Either Johann Zarco, Alex de Angelis or Simone Corsi because they all have the same idea, they seem to have the urge to try and make you make a mistake.  They don’t seem to have anything to lose at this point in the season, they are not fighting for the championship, and if they are battling for their first win of the season or their first win at all in Moto2 they are going to do anything for it.

One of the highlights of the year must have been the win in Mugello but what else has made you smile under your helmet this season?

I think the first race in Qatar was good because just knowing that Pol wasn’t expecting what was going to happen before the weekend, and I did, that was the biggest thing.  He thought he had it all wrapped up and then I stepped up my game during the race weekend and I think he knew already then it wasn’t going to be easy.  We had some other good battles, especially the Assen race, and I know we should have won that but we had a little issue with the gearbox.  But to battle the whole race like that – there were some quite hard moves but that’s how I like it! 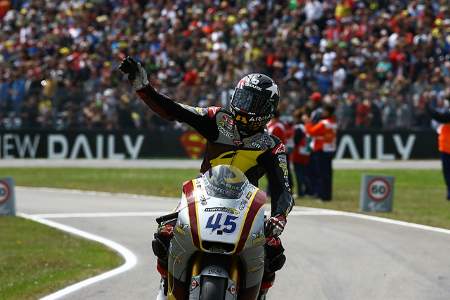 It is no secret that your dream is to race in MotoGP – realistically how competitive can you be in your first year running in the big class?

Obviously it all comes down to the machine.  If I had a factory bike beneath me then I would want to get the same results as Marquez.  There is no reason why I can’t and why I shouldn’t.  But I don’t think I will get a factory bike in my first year so we just have to do the best with what we’ve got, which in my eyes is winning.  We can’t always do that though with under-graded machinery.

MotoGP World Champion before you turn 24?

I would like to think I can be, especially after this season having a good test of leading the championship and fighting for victories.  Finding that mentality that you are going to be a world champion and want it that bad, if you can carry that underneath you with a good bike, then you end up with people like Lorenzo, Rossi & Stoner.

You tested the Desmosedici last year, how different are the Moto2 and MotoGP bikes?

I think it’s a difference between your local Ford Fiesta and an F1 car!  It is totally different – you have technology, the tyres, the carbon brakes, it’s just a never-ending list of things you have got.

Of the current crop of MotoGP riders, who would you say has a similar riding style to you?

For me the only guy I can say is Marc Marquez.  I have raced with him and he has the same mentality as me, a lot of things he does reminds me of myself.  When I watch him race now I say, “okay now you have to make it” and as I say it he is already going for it.  Also the way he attacks corners and goes on the throttle is also pretty similar to me I think.

Do you think that somebody like Marquez shows that you can take a style honed in Moto2 and apply it to a MotoGP bike, whereas before the consensus was that you had to adapt differently to the two bikes?

For me that’s rubbish about adapting to bikes, it’s got two wheels, a throttle and brakes, it’s still the same concept.  You might have to adjust the way you open the throttle, the way you brake and the way you change direction but at the end of the day you still have to get on it and ride it.

Do you have a motorcycling hero?

To be honest, all the guys who rode 500’s are pretty heroic to me after riding that thing the other month (Kevin Schwantz's RGV500 at Spa in July).  I never really grew up watching racing and thinking of them as heroes, I mean Alex Barros was pretty high up there just because his career was like mine – he has not always had the best machinery but he has been up there fighting and that’s what I like about him. 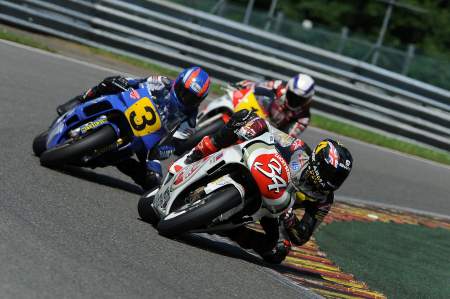 You’re sponsored by Bennetts & Bike Social, the latter being the online hub for the biking community for sharing and discussing the latest biking related news.  Is there a social mood in the Moto2 paddock over a race weekend, and which riders have the biggest personalities?

Of the Moto2 riders I speak with Marcel Schrotter quite a lot because we are quite good friends but to be honest I don’t think many of them seem to like me!  I seem to have more of a relationship with Moto3 and MotoGP riders.   I speak with Marquez and Lorenzo quite a bit and they seem to be pretty cool guys.  For me when you talk to the others you can see the difference between a rider and a racer who wants to win the world championship.

What are your thoughts when you watch the likes of Cal (Crutchlow) and Bradley (Smith) cutting their teeth in MotoGP?  Does it give you confidence, make you proud of British motorcycle racing, or fire up your competitive side to join them and beat them?

I don’t want to join them – I want to beat them, that’s a sure fact!  Cal is doing pretty well this year and Bradley is not doing bad for his first year but Marquez has just upped the game so much.  It’s world level and you have to be fighting from the beginning.  It’s not about taking time, you have to go there and prove a point from day one.

Cal & Bradley are both on satellite bikes, whereas the likes of Marquez are on a factory MotoGP bike.  Is that important and is that progression from satellite bike to factory bike something you are already thinking about now?

In your opinion, why does the mainstream British media seem to shun MotoGP when the current crop of British riders is the most successful for the last 30 years?

That is because the British people don’t currently have a strong interest in motorcycle racing.  They love F1, football and cricket but when it comes to motorcycling then they’re less interested.  That’s why it’s so hard for British riders to get any sponsors but I am grateful and lucky to have Bennetts and Bike Social on my side.

You spend a lot of time away from home during the season, what keeps your mind focused whilst you’re travelling?

Just wanting to win.  I go racing, that’s what I go there to do, so everything you do is all about winning.  You sleep on it, you eat it, think it, and everything you do is racing and winning.  When you’re driving you’re thinking about the next race you’re preparing because preparing is one of the main things to get a good result.  And then I go to dinner and because I am always dieting I have to think about my weight, and then I go training because I want to be a winner and a champion, and that’s the life.

The career of a professional motorcyclist doesn’t tend to continue much past 40 but do you intend on being involved in the industry after the racing stops?

I don’t know – when we have the off-season in the summer you have two/three weeks where you don’t want to think or talk about racing and it’s nice to have a break from it.  So I’m not really too sure but because of the way I am, and I am quite competitive, I will probably still be involved in some way in racing for a long time.

Finally, other than winning the Moto2 Championship, can you tell us any other particular racing goals you have for the remainder of the season during the races that are left?

I just want to wrap that championship up, that’s my main goal and that’s what I’m 100% focused on.  It’s not about winning every weekend, it’s about getting a good bag of points back so every time after a race weekend I set off home and think about the next race. 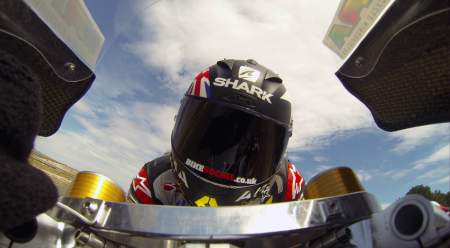