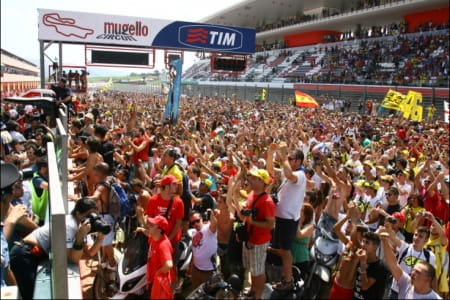 This weekend, the boys and girls of the MotoGP paddock roll into Italy for the 5th round of the championship at the picturesque L'autodromo del Mugello circuit, 23 miles north-east of Florence, for the Gran Premio d’Italia TIM as the locals call it.

Mugello is a firm favourite with the riders thanks to its high speed corners and famous, undulating start/finish straight, which at over a kilometre in length allows GP bikes to reach speeds in excess of 340kph (210mph)over a brow before braking downhill into the testing right-handed Turn 1 ‘San Donato’.

It’s the Repsol Hondas who are leading the way in the MotoGP world championship with Le Mans victor Dani Pedrosa ahead of his rookie team mate Marc Marquez by 6 points and reigning champion Jorge Lorenzo a further 11 points adrift, but don’t discount the Factory Yamaha man who beat his compatriot to the Mugello win last year, despite starting one place further back on the grid. In fact, Lorenzo will be looking for a hat-trick of victories at Mugello having also been successful in the 2011 race.  Speaking of hat-tricks, Pedrosa is on one of his own following back-to-back victories at Jerez and Le Mans.  The man in form ominously said, "The last races went very well, and Mugello is a track I like to ride. I hope the bike is working well and I want to have a good weekend."

Fresh from his incredible 2nd place at Le Mans, complete with a broken right shin, Britain’s No.1, Cal Crutchlow, will be a man on a mission once again and is looking forward to pushing the factory riders once again.

Now riding for Pramac Racing Ducati Andrea Iannone took the spoils in the Moto2 race last year although it’s the Bike Social-backed British rider Scott Redding who leads the championship by 24 points and must surely be the race favourite this time around.  Mugello is a circuit Scott enjoys riding and only last July he tested the Ducati MotoGP machine and lapped to within a reported 1s of a certain Mr V. Rossi.

Ahead of the weekend, Redding said, “Confidence is high after Le Mans and we have some new parts for the bike this weekend, which I think may give us something of an advantage at such a fast, flowing and technical track.”

Meanwhile, in Moto3 it was Maverick Vinales who was victorious in 2012 and the same man currently sits 13 points clear of fellow Spaniard Luis Salom with Alex Rins a further 16 points behind in this years’ championship.

In other news, the Ducati Factory Team will run three bikes this weekend with Michele Pirro making his 2nd wildcard appearance of the season to ride alongside regulars Nicky Hayden and Andrea Dovizioso.