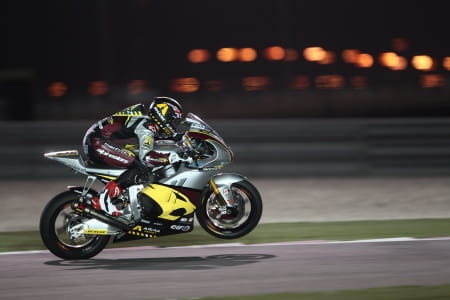 The battle for the 2013 Moto2 championship looks as if it could be one of the best yet in the intermediate Grand Prix motorcycle racing class. The 600cc four-stroke series replaced the 250cc two-strokes in 2010 and with the exception of 2011 and has provided some of the closest Grand Prix racing we have seen in recent years.

MotoGP race winner, Toni Elias dominated the first season taking seven victories and finishing the season seventy points ahead of second place Julian Simon. In 2011 things got a little more exciting with the arrival of reigning 125cc World Champion, Marc Marquez who seemed to develop a pattern within the first six or so races – he’d either put his Suter on the podium, or crash. Marquez found some consistency from Assen onwards, where he took nine consecutive podiums including six victories. He had made up for his poor start to the season and trailed title leader, Stefan Bradl by just three points heading into the Malaysian round, where a heavy crash in practice ruled the Spaniard out for the rest of the season and leaving Bradl a free run to the finish line.

Marquez returned with a vengeance in 2012 and despite attempts to stop him by young Pol Espargaro, Marquez took the crown by fifty-six points.

A combined rider-bike weight limit has levelled the playing-field slightly for 2013, meaning the slightly larger riders can get in the mix and fight for the championship. For example, Scott Redding, who has taken two victories so far this season and a further three podiums. He currently sits twenty-three points ahead of Pol Espargaro, who is playing catch up after two non-scores earlier in the season. With nine rounds remaining, these two could well be at it all year and with Rabat almost forty points behind Espargaro in second.

Should Redding win the title, he will be the first Brit to win a title in Grand Prix racing since Barry Sheene won the 500cc title in 1977.

We’re giving away 500 tickets to the British MotoGP at Silverstone. All you have to do to be in with a chance of winning is at BikeSocial.co.uk!