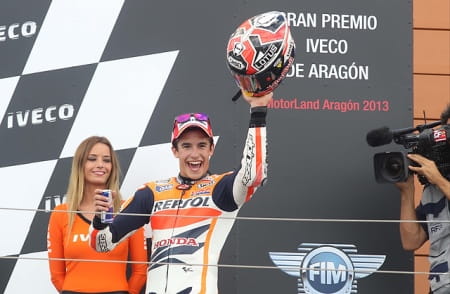 The penultimate European round of MotoGP took place this weekend at Aragon in North Eastern Spain. As is becoming the norm for the 2013 season, we were treated to quite the fight. Saturday afternoon saw yet another record breaking pole from Spanish sensation Marc Marquez and we weren’t let down on Sunday either.

In fact, the young pretender caused quite the stir in the early laps… Jorge Lorenzo had launched off the line to take the lead on lap one and attempted to pull the pin in a similar fashion to last time out at Misano. Initially, Marquez sat behind the Mallorcan with Pedrosa chasing although the elder of the Repsol Honda pairing soon got past the number ninety-three.

Attempting to regain second from Pedrosa, Marquez overshot it into Turn 12 causing the slightest bit of contact with his team mate. Pedrosa maintained his line although the tiny Spaniard was thrown from his RC213V as soon as he opened the throttle. Reports from the Honda camp after the race suggest Marquez’ gear lever may have snapped his team mate’s rear-wheel sensor, thus leaving Pedrosa without traction control. The incident is currently under investigation by race direction.

Despite losing almost two seconds to Lorenzo, Marquez soon caught up to take the lead. Double World Champion, Lorenzo put up a valiant fight but just couldn’t match the pace of the championship leader.

Towards the end of the race, a battle for third ensued between Valentino Rossi, Alvaro Bautista and Stefan Bradl. Rossi and Bautista were switching position corner after corner until Stefan Bradl got involved, giving Rossi opportunity to pull away from the Honda pair to take third on the last lap. Bautista won the battle of the Hondas from Bradl with Cal Crutchlow taking sixth.

An impressive ride from Bradley Smith saw him cross the line ahead of the Ducatis of Dovizioso, Hayden and Iannonne rounding out the top ten. Marquez now leads the championship from Lorenzo by thirty-nine points.

In Moto2, Nico Terol shot off into the distance shortly followed by Esteve Rabat. The battle for third was where it was at as championship rivals Scott Redding and Pol Espargaro went head to head yet again. Unfortunately for Redding, it was Espargaro who came out on top this time. The championship closed up in Moto3 too, with championship leader Luis Salom crossing the line in fourth. Rins took his fifth victory of the year with Vinales second and Marquez third meaning just twelve points now separate the top three with four rounds remaining.