Marquez in charge at the mid-point 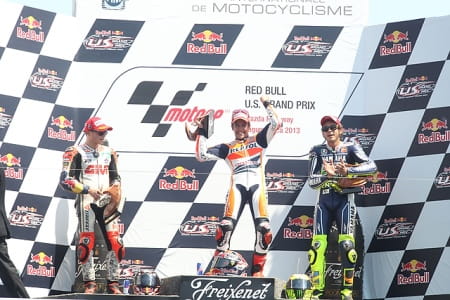 The short break between Laguna Seca and Indianapolis marks the mid-point in the 2013 season and what a first half of the season it has been! Motorcycle racing is always guaranteed to throw up the odd surprise or two but this season has been full of them. At this point, there are five riders with championship winning potential and it looks like at least three of them will take it to the wire.

If in any other year in MotoGP you’d suggested a rookie would be leading the title chase after nine races, you would have been laughed at. If you said it at the start of this year, it may have been considered unlikely but you would have to acknowledge it possible as Spanish wonder kid, Marc Marquez was moving into the MotoGP championship. He didn’t wait to surprise either, beating more experienced team-mate Dani Pedrosa to the podium and scrapping with Valentino Rossi in the opening race of the season at Qatar. In his second race, he took victory at the debut Austin GP. In his third race, he barged Jorge Lorenzo out of the way for second position in Jerez. In his fourth race, he charged from ninth to third after spending just a handful of laps on his bike in the wet. It wasn’t until fifth race – in Italy - where he fell for the first time in a race this season. When Jorge Lorenzo fell in Assen, breaking his collarbone and suffering further damage a week later at the Sachsenring followed by Dani Pedrosa crashing out injured in Germany as well, Marquez took advantage to get to the top of the standings. Hurting a little himself from a huge practice crash, he took second in Assen and stormed to victory in Germany. It was in Laguna Seca where the biggest surprise came, Marquez dominated during his first visit to the American circuit; becoming the first ever rookie to win at Laguna. With the exception of his fall in Italy, Marquez has been on the podium in every race so far this season so on current form he has to be favourite for the championship at this point…

Despite their injuries, you simply cannot rule out Jorge Lorenzo and Dani Pedrosa. Jorge has taken three wins this season – equal to Marquez – while Dani has taken two. Lorenzo has taken a fifth and a sixth with is broken collarbone and Pedrosa took fifth at Laguna. There is no doubt that when they return to full fitness they’ll be back at the front, although having sat out one race and taken less points than they would have uninjured in at least two further races – have they given Marquez too much?

Many expected Valentino Rossi to capitalise on the absence of the two Spaniards more than he has, the Italian took his first victory of the season in Assen however has failed to replicate this since, taking two third places at Sachsenring and Laguna. While Valentino has an outside shot at the title, he’ll need to make a speedy return to the top step. A similar thing can be said about Cal Crutchlow. The Brit is riding above and beyond expectations this year, putting his satellite Tech 3 Yamaha in the mix with the factory bikes at pretty much every race this year. He’s yet to take his first victory though and with Lorenzo and Pedrosa looking to ride at Indianapolis with almost full fitness, there are question marks over whether the elusive win will actually come.

As we saw at Laguna Seca with strong performances from Stefan Bradl and Alvaro Bautista, contract time draws the best out of everybody so we should expect some good, strong close racing over the next couple of months. The championship? It will be between Marquez, Lorenzo and Pedrosa but at this point in time, our money has to be on the youngest of the three…

You could win tickets to the Silverstone round of MotoGP in our latest competition, you can find out more here: http://bit.ly/1bJfAaz