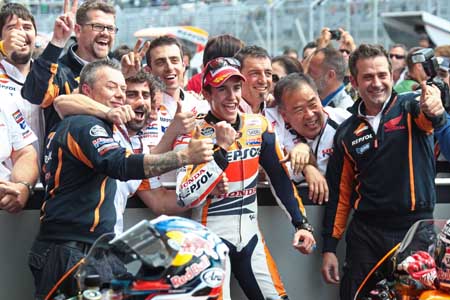 At only twenty years old, Marc Marquez spends his time riding one of the fastest racing motorcycles in the world. By 19 he already had two world titles to his name and this year he has impressed all with his debut in the MotoGP championship. He took his first podium in his first ever race and won for the first time in his second, so it’d be fair to say that Marc Marquez is something special. We caught up with him for a quick chat after he took his fifth podium of the year (out of six races) at Catalunya.

You have taken the MotoGP world by storm this year, impressing a lot of people with your pace and ability to race a motorcycle. How has your life changed since becoming a MotoGP star?

Well, I continue to be the same, but it’s true that I can’t have the same life that I used to have last year. Most people recognise me and it’s difficult to go out or go to a restaurant without having eyes on me.

In many interviews you seem to say that winning the championship this year is probably not possible. Every race you’ve finished you’ve been on the podium and you’ve shown you have the talent to beat both Dani and Jorge. Is this not what it takes to be champion?

It’s very complicated to be champion this year, this is my first year in MotoGP and I still have to learn a lot. I don’t have experience in this category and the other riders are very strong and with much more experience. My adaptation to the bike has been quite good, but there are still many circuits where I’ve never ridden the MotoGP machine and I don’t know the correct settings for the bike.

Your rival from Moto2, Pol Espargaro is hotly rumoured to be going to Yamaha next year. Do you think he has what it takes to be competitive in the MotoGP class?

Yes, Pol is a very good rider and I’m sure that he will learn very fast.

What other Moto2 riders do you think would be fast in MotoGP?

I don’t know, sometimes the ones that are fast in Moto2, after they arrive to MotoGP and they can’t find the correct feeling. I don’t know. Maybe also Redding could be fast.

Dani has said to some of the media that you copy his set up and style, as you are new and he is the more experienced teammate. What do you learn from sharing a garage with Dani and would you say you do copy his style, or adapt things he does into a style you are comfortable with?

I learn a lot from sharing a garage with Dani, as this year he’s very strong. He has a lot of experience and he knows the bike very well. On the other hand, he has a very different riding style and the weight is very different, so the settings of the bike are not the same, but equally I’m very proud to have Dani as teammate.

What do you think about the future? If this is your first year, surely you’re only going to get faster?

I prefer not to think in the future and to go step by step, always trying to do my best. The really important thing for me is that at the end of the season HRC and Repsol are happy with me and my results.

Lorenzo says he became the rider he is now when he learned his limits after a lot of big crashes in his first couple of years. You’ve had a few crashes this year so far, what does crashing contribute to the learning process for you?

It’s true that once you crash, there is a reason why, so you try to know why you crashed and improve it and try not to make again the same error. With crashes you know the limit of the bike in many aspects, but sometimes you can’t control the crash and be injured. Here is when the problems arrive. The best option is going step by step, trying to improve every day, trying to learn and avoid crashes.

If you finish ahead of Dani in the championship this year, what impact do you think it will have?
It’s quite impossible, we will see, but as I said, I think day by day, not in the future.