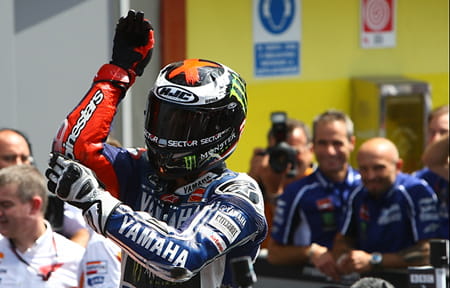 Reigning MotoGP Champion Jorge Lorenzo took an easy victory at the fifth round of the series at Mugello, Italy this weekend. Despite polesitter Dani Pedrosa grabbing the holeshot, Spaniard Lorenzo eased comfortably into the lead by the first corner, and held on until the chequered flag. It was his second consecutive win of the 2013 season so far.

Getting an equally good start, GP ‘rookie’ Marc Marquez slotted quickly into third place behind team-mate Pedrosa, before moving into second position during the closing stages of the race. However, with just three laps to go, Marquez crashed out of contention while challenging the Honda rider – surely a disappointing blow as he now drops down the standings to third.

Meanwhile, Brit Cal Crutchlow, who was running in fourth, benefitted from Marquez’s crash – and was immediately promoted to the third step of the podium for his second top-three placing in as many races. Team-mate and fellow Brit rider Bradley Smith also had a positive race at the Italian circuit, finishing ninth – his best finish of the season so far.