Marquez: "I would rather be over prepared for MotoGP"

MotoGP rookie Marc Marquez has revealed he has stepped up his training so that he's over prepared for MotoGP, rather than under prepared, to tackle the 250+bhp beast!. 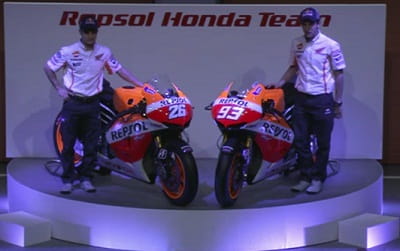 The news came as Honda rolled out its new 2013 Repsol Honda RC213V at a glitzy team launch in Madrid hosted by the BBC’s MotoGP presenter Matt Roberts.

The new bike, which was revealed minutes ago, will be campaigned by Dani Pedrosa and Marc Marquez in this year’s MotoGP world championship.

The bike features a host of technical changes and a new Repsol paint scheme.

MotoGP rookie Marc Marquez said:  “I am excited to see the bike and officially become a MotoGP rider. Looking at those pictures of me as a child on those bikes, in reality it really wasn’t that long ago that I was a child racing bikes and I can’t believe how fast it’s gone and I am now a MotoGP rider. When I rode the new bike in testing at Valencia I really got a feel for the power, especially coming out of the corner, the Malaysia test was much more about getting used to the bike and to get a proper feel for it, and there is much more work to do before the season starts of course.” 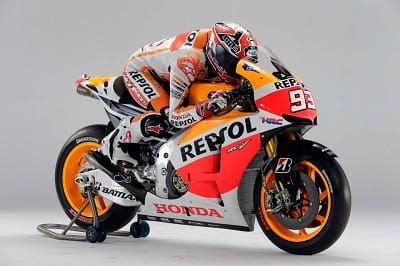 Marquez was within a second of established MotoGP riders but says he still has more work to do to ensure he is ready to take on the 250+bhp of the RC213V.

He said: “I have stepped up my training and would rather be over prepared rather than under prepared to take the extra power and weight of a MotoGP bike compared to a Moto2 bike, but there is still work to do to make sure I am ready.”

And when asked about the new 2013 Repsol colour scheme, Marquez said: “It is nice for me to step up to MotoGP with a change of image for the Repsol Honda team and a fresh start for me.”