Final WSBK testing of 2013 kicks off in Jerez 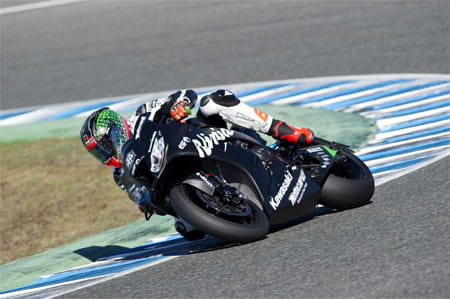 A number of World Superbike teams are testing in Jerez today and tomorrow as part of the final test of the 2013 calendar year. Those testing include World Champion, Tom Sykes who has only managed to fit in a little bit of testing since taking the championship crown at Jerez just over a month ago as his wife has recently given birth to their first daughter, Millie.

Sykes is joined on track by 2014 team mate Loris Baz and a number of other teams looking to maximise time on track before the winter testing ban kicks in. Eugene Laverty is making his on-track debut for Voltcom Crescent Suzuki at the final test of 2013, seemingly alongside Alex Lowes who is yet to be confirmed in the team for 2014 for contractual reasons. Lowes tweeted this morning to say it was “time to have fun”, so make of that what you will.

The PATA Honda pairing of Leon Haslam and Jonathan Rea are also present at the test along with Marco Melandri and test rider Alex Hoffman for Aprilia.

Having recently announced their return to the series with the Yakhnich squad, former GP-rider Claudio Corti is getting his first run out on the MV Agusta F4 RR at the Spanish track while Sylvain Barrier is reportedly testing a BMW EVO machine.

After Jerez, with the testing ban imposed we won’t see further World Superbike action until January 15th at the earliest.