This Saturday Scott Redding will be defending his World Championship lead at the Dutch TT, round seven of the FIM Moto2 World Championship, before immediately heading to Belgium for a charity Supermoto race on Sunday.

The Supermoto race, which will be held at Spa Francorchamps, is in aid of a children’s cancer charity (Associations Des Enfants Cancereux) and will see Bike Social-sponsored Redding take on the regulars of the Belgian Supermoto Championship, along with two-time Belgian Superbike Champion, Gregory Fastre.

Redding got some practice in last Friday aboard his Kawasaki KX450F Supermoto bike but was limited to the tarmac section of the track. The 20-year-old Briton will race back from Assen on Saturday evening to get in a couple of hours of practice on the full track, which includes a 300 metre dirt section, ahead of his Supermoto race debut on Sunday.

“I’ve been riding Supermoto over the winter and as part of my regular training schedule, so I jumped at the chance when I was asked to race this weekend,” said Redding. “Riding for the Marc VDS Racing Team means I get a lot of support from Belgium but because, there is no Belgian Moto2 round, I very rarely get the chance to see them.” 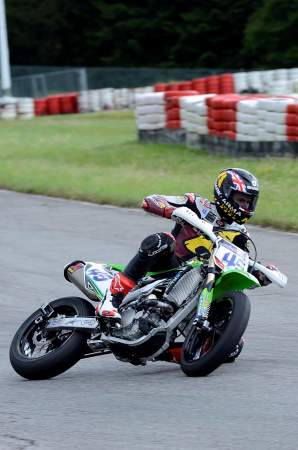 “By racing at Spa this weekend I get to see the fans who’ve supported me the last four years, raise some money for a very worthy cause and finally find out just how quick I am on a Supermoto bike compared to the guys how regularly compete in the Belgian Championship.”

“The track is pretty good, and the bike worked well when we were there on Friday, but I only got to ride the tarmac section of the track. We went to have a look at the dirt section and I don’t think it’s going to pose any problems, but I’ll be back there on Saturday evening to find out.”

“Like all these things that we do between Moto2 races the idea is to have some fun but, at the end of the day, I’m a racer and so is everyone else who’ll be out there, so I know it’s going to be competitive. Just how competitive remains to be seen!”

The Supermoto race takes place on Sunday 30th June at the Spa Francorchamps Karting Circuit. Entry is €10, with proceeds going to the charity.