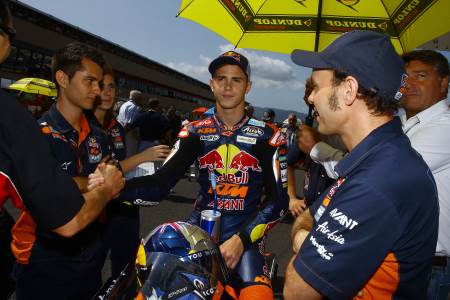 Danny Kent is set to compete in the Moto3 championship in 2014 following a difficult year with Herve Poncheral’s Tech 3 outfit in Moto2. Kent, a two-time Moto3 race winner, is looking to return to winning ways as he rejoins Aki Ayo’s Red Bull squad. It was initially thought Danny would compete with KTM machinery for 2014, although it has recently been announced the bikes will bear the Husqvarna badge. We caught up with the twenty-year-old for a quick chat earlier this week:

How have you been getting on in winter testing?

Testing has gone well and I’m happy with how everything has gone. It’s good to be back with the Red Bull Ajo Motorsport team. The purpose of these tests was to get the feeling again with the Moto 3 bike and to find out the best way to work with the crew ready for next year.

You’ll be riding for Husqvarna in 2014, how will your Husqvarna compare with the KTM’s in the other half of Red Bull’s team ridden by Jack Miller and Karel Hanika?

Honestly, I don’t know much about the plan but I’ve been promised the bike will be competitive and be able to win races. I know at the beginning of 2014 the bikes will be the same and as the year goes on the two bikes will be developed differently.

Did you know you’d be riding for Husqvarna from the start, or was this a later development?

It was a a later development, I sat down with Aki Ajo during the last test and he told me about the plans with Husqvarna.

What motivated your decision to go back to Moto3?

We had a very difficult year in 2013 with the Tech 3 Mistral 610. It got to the stage where I wasn’t enjoying riding and lost my motivation. It would have been good to stay in Moto2 but with a well-known and proven chassis, one that could win races. For Moto3, I knew I’d have to return with a competitive team and I’ve got that with Red Bull Ajo Motorsport, we’ve got the experience together and already know areas we can improve ready to fight for the title in 2014.

Do you wish you’d done anything differently in 2013?

If I could go back in time I think I would have stayed in Moto3 for another year. I finished 2012 strong with two race wins; you never know if I had stayed I could have been amongst the leading group fighting for the championship in 2013. On a more positive note, having a year in Moto2 I have learned a lot and it’s made stronger and ready to fight in Moto3 next year.

Of course my aim is to win races and then hopefully turn that into winning the Moto3 World Championship. It won’t be easy but I will be working hard this off season to push myself to the limits so I go into 2014 stronger than I’ve ever been.