Kent returns to Moto3 with Red Bull KTM for 2014 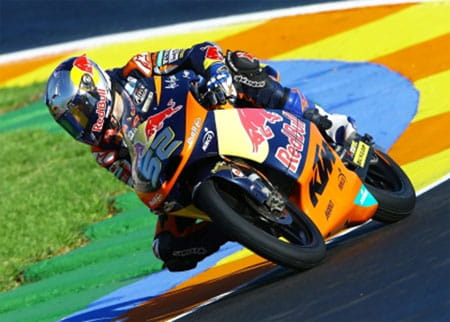 As suggested on twitter a few weeks back, Danny Kent will make an unusual step backwards in the Grand Prix paddock for 2014 as he moves back to Moto3 with his old Red Bull KTM Ajo team.

The young Briton, who has had a difficult season in Moto2 on board the Tech 3 Mistral 610 had signed to remain with the HervePoncheral outfit for 2014 however had a last minute change of heart, deciding to leave instead.

Kent finished fourth in the Moto3 championship with Red Bull KTM in 2012 after taking two wins and a third place. He joins Aussie Jack Miller and Red Bull Rookies champ KarelHanika in Aki Ajo’s team for 2013.

"I am very happy to be returning to the Red Bull KTM Ajo team. I think that this is the best opportunity possible” said Kent.

“This is a very hard-working group, very professional and always in the fight for wins and titles. I want to make the most of this second spell with the team and finish as high up the order as possible at every race. I can't wait to get started and begin working hard. My collarbone injury is getting better every day, I have more movement, so I think that I will be ready for the first test in November.”