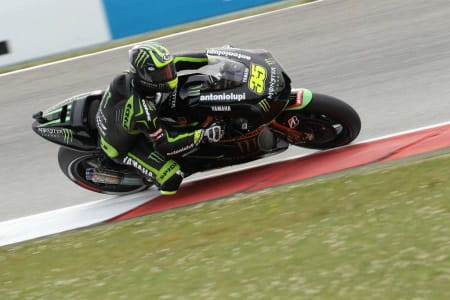 Cal Crutchlow became the first British rider in eleven years to claim a pole position in the premier class of motorcycling. Jeremy McWilliams was the last British rider to start at the front of the grid for a MotoGP race, back in 2002 for the Australian GP.

The question now is can he win on Sunday and become the first British rider to win in the premier class since Phil Reid in 1976 at the Czechoslovakian Grand Prix?

Crutchlow currently sits fourth in the championship and on this form he looks set to spoil the Spanish party and break up the pack that is Jorge Lorenzo, Dani Pedrosa and Marc Marquez. With Crutchlow on this form it’s hard to see how he won’t have factory machinery underneath him for 2014.

Crutchlow said on his maiden pole: "It feels fantastic to have finally got my first pole position in MotoGP. It might have been a different story if Jorge (Lorenzo) wasn’t injured but you can only beat the guys on track and I did that today. It would have been good to have a dogfight for pole position with Jorge because it was obvious before his crash that he was going to be the man to beat. Hopefully at some stage this year I’ll be having a battle with him for the win. It is a great achievement for the Monster Yamaha Tech 3 Team because it is not often a non-factory rider gets a pole position in MotoGP. The competition is incredibly tough but today we showed again that we can compete with the very best. I’m particularly pleased to be on pole because I’ve been struggling a bit with the bike in the dry. I wasn’t happy in FP4 and if we can make the bike calmer there is no reason why I can’t go faster. I’m looking forward to the race now with a lot of confidence and we will see what happens but it could be a big battle hopefully for the fans to watch. Congratulations also to Bradley because he is not in the best physical condition and to be on the second row shows he is making big progress.”