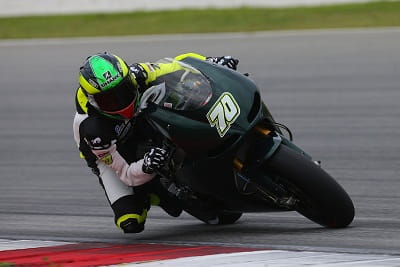 The team boss of Britain’s only MotoGP team, Paul Bird Motorsport, has revealed that even he was surprised how well his rider Michael Laverty went at last week’s CRT MotoGP tests at Sepang, in Malaysia.

Laverty, from Toome in Northern Ireland, ended the final day in 15th place overall and was the second of the Claiming Rules Teams (CRT) machines after gradually upping his pace each day aboard the Aprilia ART, with the 31-year-old recording a lap-time of 2:03.874 on his final lap.

Using last year’s bikes, Laverty and team mate Yonny Hernandez both impressed their new bosses. Despite being limited in the amount of work they could do without a spare machine each, Technical Director Phil Borley said the team were happy with the amount of progress made.

The brand new British-built PBM machines are expected to be at the next official MotoGP test at Sepang on February 26/28th and like the pair of 2012 machines, will sport the team's British Racing Green colours. It is part of a long term plan by team owner Paul Bird in MotoGP to develop an all British bike.

Bird said: "We have had a very successful test and I'm delighted with how everything has gone. I have been speaking to Phil (team boss Borley – ed) and the riders on a daily basis and we have built up a brilliant rapport already. I shouldn't be, because we have worked with him for three years previously and know how talented he is, but I'm surprised at just how well Michael has gone given his lack of experience with the bike, brakes and tyres at a track he's never seen before. Yonny continues to impress us all despite his shoulder still not being 100%, he's very much helping the team which is great and he'll be fully fit by the start of the season. The new bikes are nearly ready so we'll have them at the next test and hopefully we can continue this great start. I'm more than happy, especially as we now have silenced a few of our doubters!"