The team boss of Moto2 debutants ‘Caterham Moto Racing’ has admitted that the team’s intentions are to “make our mark on the Moto2 circuit before we move onward to MotoGP.”  During the exclusive interview with Bike Social, Johan Stigefelt, also highlighted:

Back in October the Group announced their intentions of competing in the Moto2 World Championship as part of their expansion plans to develop and sell their all-new road bike range. 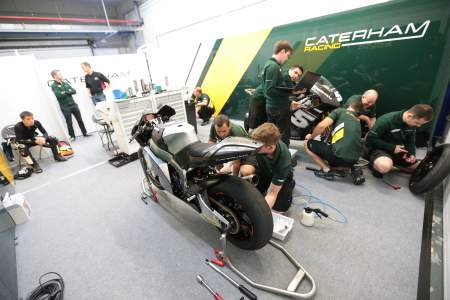 Stigefelt explained the decision to race in Moto2 as part of the launch of Caterham into motorcycling, “Our original challenge was making a choice between Moto2, Moto3 and MotoGP. We chose Moto2 because it is a highly competitive class and an area where Caterham Bikes can actively compete and impress/succeed even as a fledgling team. Ultimately we want to be a podium MotoGP team but that is some time away, maybe two-three years. Moto2 is also very similar to MotoGP in terms of a class so we’ll be getting our practice in, and making our mark on the Moto2 circuit before we move onward to MotoGP.”

The new kids on the grid are being led by ex-250GP racer Johan Stigefelt and a host of ‘industry renowned, skilled engineers’.  2013 AMA Superbike Champion, 23-year old Josh Herrin, was confirmed at the team’s unveiling in Malaysia, and it was later confirmed the American would be partnered by the more experienced Frenchman, Johann Zarco, who finished 9th in the 2013 Moto2 Championship.

Stigefelt told Bike Social, “In order to sell our road bikes effectively, like the new Brutus, we need to lend our commercial interests a racing pedigree. Caterham have always been a sporting, performance brand – we want Caterham Bikes to reflect this high standard and we have the technology and understanding to be a major player in this area.”

The Oxfordshire-based team will run Josh Herrin on the number 2 bike with the vastly experienced former MotoGP and World Supersport engineer, Mark ‘Brains’ Woodage, as his Crew Chief.  23-year old Zarco retains his number 5 from last year and despite Stigefelt’s admission to the challenges the team faced to acquire such talented riders for their debut season, he firmly believes they’ll be challenging at the sharp end.  He said, “We have to be humble – whilst we have an incredibly skilled team of technicians and riders we mustn’t fall at the first hurdle by being overconfident. We’ve got two fantastic riders, it was a big challenge to get them alone. So our realistic aspirations are to go in and establish our riders firmly within the top five. Both riders have impressed us in the tests but we need time to develop and build up.”

Speaking about his new riders, Stigefelt continued, “Zarco brings an incredible amount of knowledge and experience with him from France, he has an innate capability to win, a trait valuable to any team. Herrin is more of our wildcard choice, but that is not to belittle his skill, he wouldn’t be where he is now, on our team, if he wasn’t up to scratch. We chose him because it’s good practice to take a rider into a championship young, a lot of development can be done from that blank canvas.” 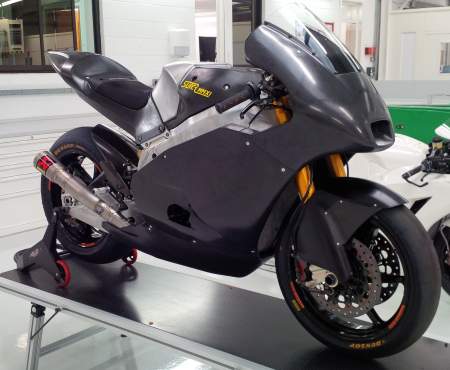 The British brand under the guidance of Tony Fernandes are using the Swiss-based Suter chassis as a home for the standard Honda 600cc engine, and the team looked impressive in the official post-season tests at Almeria and Jerez in November. Both riders came away in a positive frame of mind.  Zarco said, “Finishing the season like this, with good lap times and feeling relaxed on the bike is a good sign for 2014 and I will definitely fight at the front and enjoy my next season in Moto2”.  Herrin said “I exceeded my goal and feel so comfortable with the bike that I go into the winter fully confident for next season”.

Looking further down the line, Johan Stigefelt told Bike Social that, “The first two years are critical to development, to see where we are. We’ve got everything going for us, our manufacturing capability is very impressive we already have a factory with more than 300 people working on this project. The great thing about being part of the Caterham Group is that all knowledge is shared between the teams within the Group - CaterhamF1, CTI and Caterham Cars. Developing technology for the bikes has already begun and we’re excited to get them out there for everyone to see. We’re currently in the process of developing some aerodynamics for the Moto2 bikes – taken from technology developed by CaterhamF1, which will eventually be incorporated into the commercial bikes. We have a host of industry renowned, skilled engineers working for us, many of the people working for Caterham Technology and Innovation have been key players in Bike racing and on Bike teams before – so we’ve definitely got very promising roots, we have to work hard to transfer those roots into a firm series of successes.”

Caterham Cars was born in 1973 and is now part of The Caterham Group which has been owned by Tony Fernandes, Kamarudin Meranun and SM Nasarudin since November 2011.