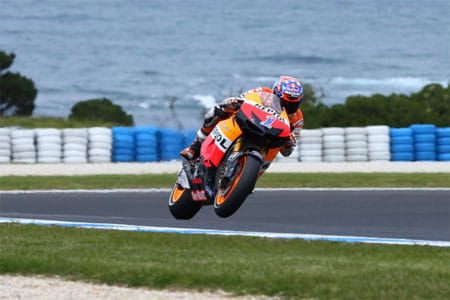 This week - at what would have been his home Grand Prix – Casey Stoner is to be awarded the title of MotoGP Legend, an accolade held by just nineteen others. The Aussie is also set to perform a demonstration lap alongside fellow Aussie legends Mick Doohan and Wayne Gardner this weekend.

A couple of years on from his retirement from MotoGP action the skills and feed-back of the two times World Champion still ranks highly with Honda for whom he is carrying out various development works. The Aussie who turns 28 years of age this week (16 Oct) has been working on the production MotoGP bike which will be introduced next season with one of them destined for Scott Redding, the current leader in the Moto2 title stakes who graduates into the top flight with the Gresini team.

Stoner gave the bike the “thumbs-up” reckoning it had a similar feel to the factory prototype racer and with the tweaks suggested, ahead of his next test session would be competitive.  He also spent time evaluating upgrades to the factory bikes the value of which should soon be seen.  All of this from a man who stunned the racing world in May of last year by announcing that he would be quitting the sport at the end of that season largely because he was not enjoying it.  Will he, or could he, be tempted back into racing at the top level remains to be seen?

His departure from the racing scene left a void at the sharp-end of the pack. OK, it has been filled in some ways by the ever exciting and determined young Spanish gun Marc Marquez who is bringing something different, in his “rookie” term to the party, sheer exuberance, but he still has so much to fine-tune compared to the stylish Stoner, the only rider so far to have truly conquered the Ducati MotoGP bike, a feat that not ever Valentino Rossi could achieve, and proved that by winning no less than ten races en route to the first of his two World titles in 2007.

Four years later and he back aboard a Honda, the marque he had made his MotoGP debut aboard in 2006, and Stoner was the dominant force, again winning ten races and finishing off the podium only once, as he regained the prized silverware in true champions style.  The defence of that 2011 crown saw him win the early season rounds at both Jerez and Estoril, circuits he had not previously won a MotoGP race at, but then came his bomb-shell announcement of impending retirement at Le Mans on the eve of the French race.

Stoner was challenging but under threat from Jorge Lorenzo but the crunch came at Indianapolis when the Aussie tumbled, damaging ankle ligaments, and though he somehow raced there, into fourth place, he was to miss the next three races having undergone remedial surgery.  But, he was back in action to win his home Grand Prix at Phillip Island so the sixth consecutive year.

Not quite the winning finale as he signed off in Valencia with a third place, and third overall in the title stakes.  Subsequently a dabble in Aussie V8 Supercars and then his development input into the Honda challengers for the future.  But, no-one is betting that these tests are a prelude to his two wheel racing return.