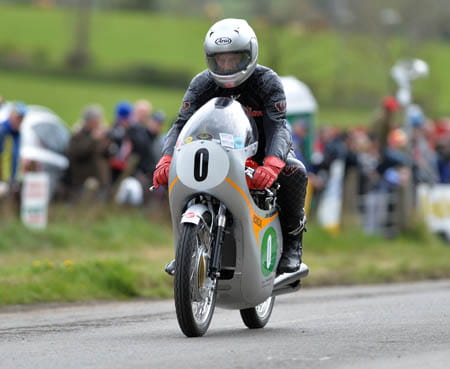 To most motorcycle racing fans, Jim Redman is a household name. The six-time World Champion is also a six-time Isle of Man TT winner, taking double wins in 1963, 1964 and 1965 in the Lightweight and Junior TT Races. Over the course of his professional motorcycle racing career, he achieved a staggering 45 Grand Prix victories and was awarded the MBE for his achievements.

At 81 years old, Jim may have long been retired from the sport, but he’s still a huge TT fan! We caught up with him just before he flew from his home in Europe to the Isle of Man for this year’s TT races and asked him some of your questions…

Stewart Mac: Would you like to compete on today’s bikes?

“Yes, I’d love to compete on today’s bikes! I was lucky enough to ride one of John McGuinness’ TT-winning bikes in a parade which was fantastic. It was a beautiful bike.”

David Harrison: Who do you think are the best riders now?

“Since Casey Stoner retired from MotoGP, there has been some fantastic competition. Personally, I believe Danny Pedrosa could be the next long-term World Champion.”

Hedley Meyers: What do you think of the Honda engines then and now?

“The Honda 6 was voted the best bike of the last millennium. It was a fantastic bike that stood on its own. Due to FIA rulings, bikes nowadays are very similar. But, I think teams should be left alone to do what they like with the bike.”

Harry Clark: What are the three things you miss most about being a professional racer?

“I miss the noise of the bikes. I miss the camaraderie among the riders – we’d be enemies at the weekends but best friends during the week! I think today’s race circuits are very alike now – you could almost race on the same track every weekend and just call it a different name! When I rode, we mostly rode on public roads so they’d all be different to one another.”

And we had some questions of our own too…

Do you look forward to the TT the most of all events?

“I haven’t been to the TT for a few years, so I can’t wait to go back! It’s such a special place and to win the TT – just one race – is like winning a world championship title.”

Do you still ride a motorcycle?

“I ride in 25 parades and demonstrations across the world each year. Some can be fast parades, and they’re a bit like a race because your time is recorded at the end.”

What is life in South Africa like for the retired motorcyclist?

“I still attend three or four events in South Africa every summer, which is Europe’s winter. Then I’m in Europe from May to October. I have a fantastic lifestyle, similar to the one I had in the 60s… just less pressure!”