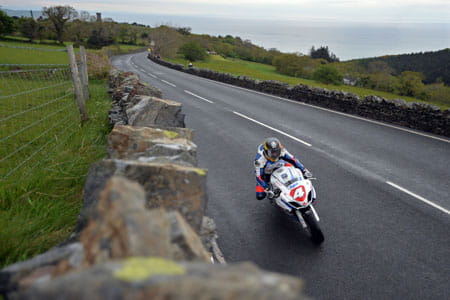 Guy Martin is one of the TT’s biggest names. Known for his massive sideburns and love of tea, the amiable Lincolnshire rider has been competing at the annual Isle of Man road races since 2004 – this year riding under the Tyco Suzuki banner. During recent years, his celebrity status has been elevated due to his starring role in a number of TV documentaries including The boat that Guy Built and How Britain Worked, but he remains a down-to-earth character, prioritising his job as a truck mechanic over racing full-time.

Earlier this week, we asked fans of our Facebook page to submit their questions to Guy. We caught up with him for a quick cuppa in between the busy TT practice schedule to see what he had to say…

“To be honest, it varies from year to year. It all depends on the bike I’m riding and how is it performing. But, if I were to choose just one, it’d be Goseley, which is the last major corner coming out of Ballacraine.”

Gemma Croker: My other half wants to know how you got into racing as he loves his bikes! Any tips?

“My Dad always raced bikes – but actually didn’t really ever encourage me to race. I had a few bike accidents while on the road, so thought I’d better take up racing instead! I ended up saved all my money to buy a race bike, and dad helped me buy a few bits and bobs too.”

Olly Sankey: If you could ride in any era of the TT, what would it be and who would you like to race against? What bike in TT history would you most like to ride?

Hannah Willis: Do you take sugar?

“No, I sold that ages ago. I have got a classic car now though.”

Richard Brookes: Would you ever take up racing full time, or are you happy being a truck mechanic?

“I think I’ll always just race as a hobby – I love my job too much. I don’t think I’d change anything now.”

“My favourite event is the Ulster GP because it’s a short and sharp event. But as a circuit, the TT takes some beating!”

Wendy Wardale: Are you doing the Manx in August this year?

“I still haven’t decided, but I would like to if I can get away from work - although my work can be pretty busy at that time of year.”

@AndrewSmall1000: Invisibility, invulnerability or the ability to fly?

“I’m not bothered about flying! I can’t see the point of being invisible and not sure about invulnerability…”