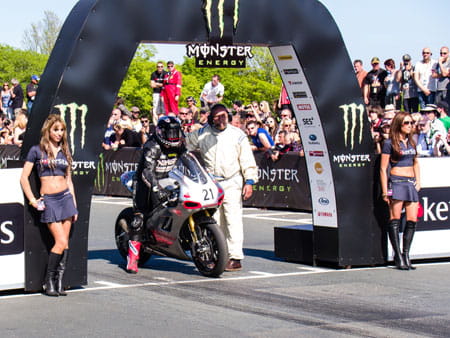 “It’s been a good couple of weeks” according to Norton CEO, Stuart Garner, as Bike Social caught up with the Donington Park-based British manufacturer after their 2013 Isle of Man TT adventure.

The famous brand returned to the Isle of Man in 2012 with Ian Mackman aboard the SG1 but the Senior race was cancelled following an inordinate amount of rain… even by Isle of Man standards.  Roll on 12 months and not one but two SG2s were ushered to the start line of the famous 37 ¾ mile course ahead of both the Superbike and Senior races.

In terms of preparation, the Norton team is never going to be as ‘well formed’ as the Honda Legends and BSB teams who race far more regularly and are therefore much better prepared, but the Norton boys stuck together and shared the cooking and cleaning on top of their bike preparation ‘day job’.

Q. After last year’s disappointment, how did the 2013 TT go?

Last year was a washout; we took a chassis (built at the last minute) with the aim of data capture, geometry and telemetry to make the 2013 chassis the one to give us a result.  So even though we didn’t race last year the data that was captured resulted in a chassis for 2013 that “handles beautifully” according to both riders.  We’ve taken it forwards, finished 18th in the Superbike race despite being 30-40bhp down on the top boys, so the reliability to get it home after 225 or so miles means we’re really pleased.

We went faster in the Senior race and nudged at a 123mph average lap… with a road engine but that showed the bike’s development so three out of four finishes over the two races, well, “happy days”! 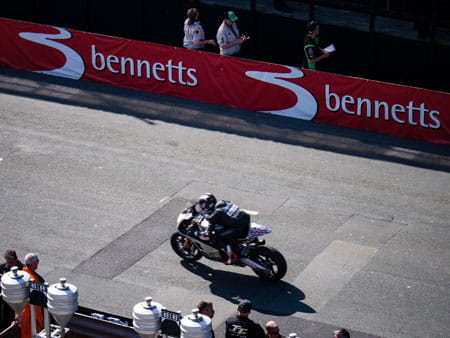 Q. Was that beyond your expectations?

No, actually a bit less than we’d internally targeted although the performance of the chassis was better than expected so I guess you could say that we achieved more with less.

Q. What worked and what didn’t?

We’d developed the semi-active suspension but because of the lack of testing during practice week it meant that we had to turn it off.  We simply didn’t have enough testing and set-up time and it would have been unfair on the riders.

Even on a completely unproven bike, our Head of Design, Simon Skinner, reckons we have a “really, really good chassis”.

Q. How about key learning’s for next year and the bike’s development?

We needed track time on the Mountain Course so from what we’ve learnt on the Isle of Man means that over the coming weeks we can fully develop the active suspension system.

For 2014 we’ll be looking to have a better engine and suspension platform for significant performance gain.  Between practice last year and the race this year we’d improved by 8mph in our lap time but I can’t imagine that kind of gain again by next year.  122mph is the base and we’ll look to improve on that.  We’re having meetings to decide if we are going to use the Aprillia V4 or our own version.

The Aprillia V4 was always the benchmark for us, to see how it worked with our chassis.  The long-term ambition has always been to develop our own platform but that would be hugely expensive and takes time so over the next year or two we’ll be developing our own platform but until then it’s common sense to move the risk from the business.

As far as the suspension goes there will be three settings:

Q. So what next for the SG2

Well once we get some oil breather problems sorted out we’ll look to do a few races this summer, possibly some short circuit possible club races or Irish road races but because we have a prototype bike it means we can’t race in BSB.

Overall Ian and Dan have done really, really well.  The TT is such a physically demanding course from the way in which the body compresses at the bottom of Bray Hill through to the 3-foot jump over Ballaugh where your stomach almost comes out of your mouth so I’ve got full respect for the boys for finishing.

Q. And if there were a prize for the best sounding bike then the SG2 would’ve taken it

The TT gives us a great opportunity to show off the brand but the fans love to smell, hear and feel the air as the bikes rush past.  We’re all petrol heads and it’s part of the experience to entertain the crowd!