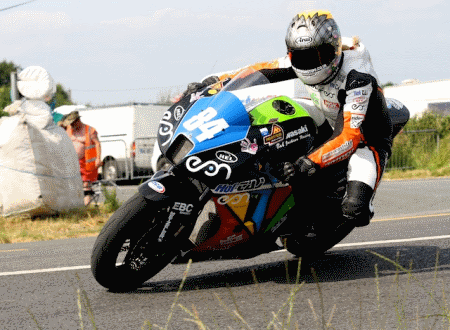 As one of few women at top level motorcycling, it’s fair to say that Maria Costello is a road racing legend. She’s currently out on the Isle of Man competing in the Bennetts Classic TT. We caught up with for a quick chat in between sessions.

What are you riding at the Classic TT?
I’ve got a Paton in the 500 Classic class from Peter Beugger. I’ve got the Bob Jackson Suzuki C20 in the 250cc Classic. The Team Classic Suzuki GS1000 in a Harris frame which is still being built! We were meant to be out on that yesterday so we’ll have to see if we’re going to get it out.

How different is it riding a classic bike compared to a modern bike?
Depends what you’re on really, for example the Paton is a fantastic bike to ride, it stops, goes and handles amazingly, you could compare it to a modern bike. I ride older stuff outside the Classic TT as well, I rode a Garden Gate Daytona Manx Norton last year at Goodwood and things like that are very different to modern bikes because the front brakes aren’t as good and they don’t handle as well. A Garden Gate Manx Norton does not handle, they are like a garden gate, it just weaves along! But it depends what you’re on, classic bikes are very varied so it depends what you are riding. My Paton is gorgeous and it’s the nearest thing to a modern bike in terms of handling.

The Classic TT runs to celebrate the history of the TT. Why do you think it’s important to do this?
I love the history of the Isle of Man and the races here and how long it’s been running for. I find it all fascinating, the invention of the travelling marshals and things like that.

How hard do you push in a Classic race?
Just as hard as any other time, it’s still the same, we’re still racing and still wanting to do well so it’s just the same.

Throughout the history of the Isle of Man, few women have competed. Why do you think this is?
It’s always been known as a male domain and it’s something I came across not as a youngster but later on in life and I wasn’t aware that you could race motorbikes when I was younger. There are less coming through because they start later on in life whereas most of the top racers start when they are really little. It is happening more now but there probably needs to be more done to ensure there are ways for young girls to find motorcycle racing. It’s a male domain and that’s always been the case.